Today I had booked a full-day excursion with a 4×4 around Wadi Rum. Breakfast was really nice and copious – from my seat I had a striking view of the desert. Then I jumped into the back of a Toyota 4×4 pick-up truck. The driver had arranged benches and cushions along each side, with a little canvas canopy to protect from the sun. The view was much better than it would have been from a standard seat in a car, and I really felt close to the desert.

The tour included 8 sites of interest in the Wadi Rum reserve. Some of these were associated with Lawrence of Arabia, although I thought the clever Jordanians were simply using his name to turn very ordinary objects into supposed places of interest. Lawrence’s spring turned out to be a pool of green stagnant water reached after a steep scramble over boulders – although the view was nice. “Lawrence’s house” was an undistinguished pile of stones, that might once have been lived in by someone, but probably not Lawrence. To be honest the first few places I visited were disappointing and swarming with small groups of tourists, each arriving with their own 4×4, mostly on half-day trips out of the camps or the visitor centre. Even our driver seemed a bit embarrassed to be showing us some of these places. I still had some fun though at a couple of places where the wind had created a natural rock bridge in the mountain and where (after standing in a queue of brave tourists) you could have your picture taken balancing precariously over the void. 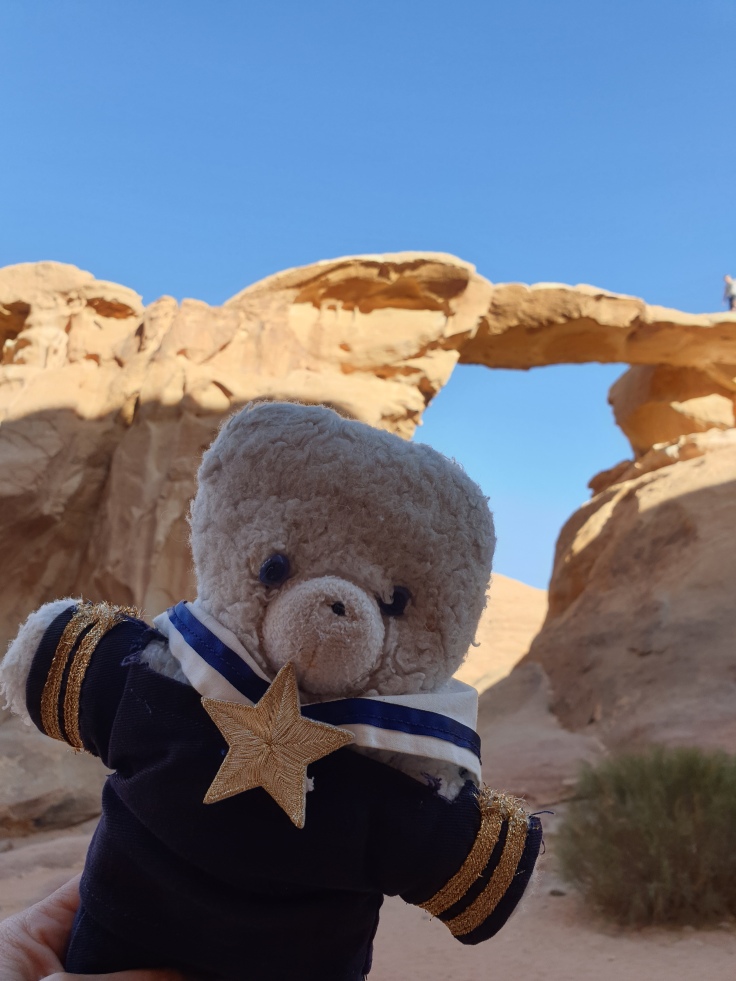 There was also a very interesting canyon with ancient rock paintings dating back 2000 years.

The day got better as we went further south in the reserve, towards the border with Saudi Arabia and out of the range of the half-day tourists.

I had a huge packed lunch in a shady spot under a cliff and was visited by some curious camels. 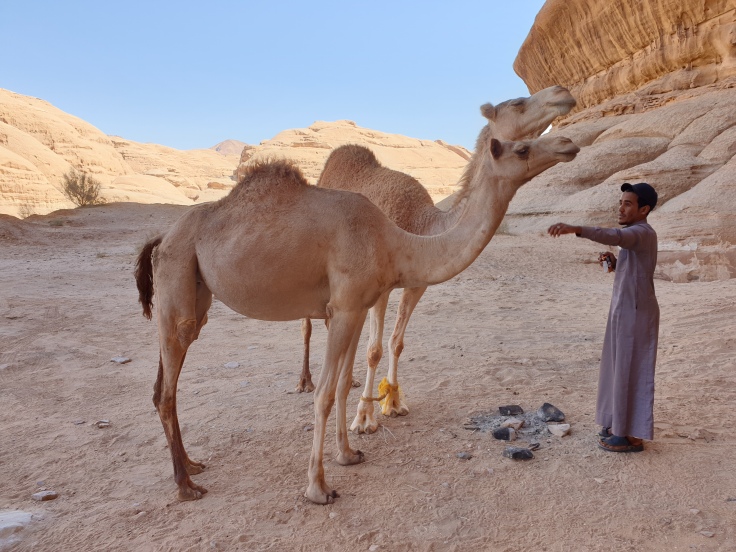 As we set off again, the view of the desert plain and surrounding steep red mountains was breath-taking – even being a very well-travelled teddy bear I had never seen anything like it. Now I understand why Wadi Rum is the standard location for shooting films set on the planet Mars (including the recent film The Martian). 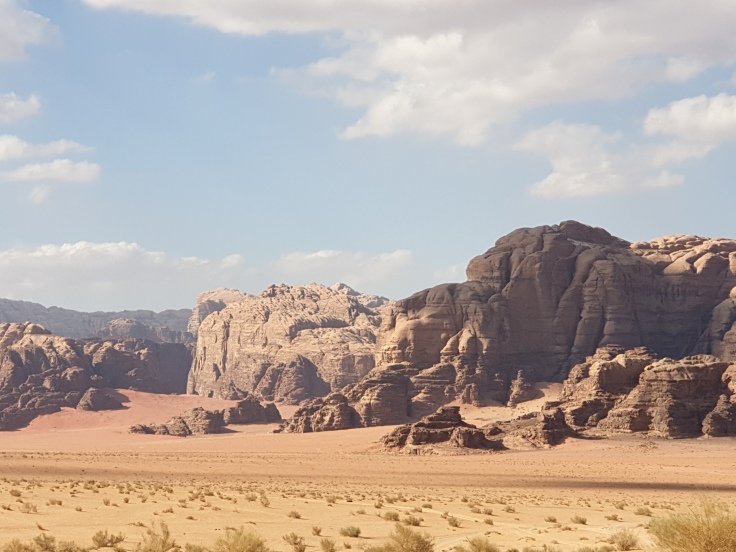 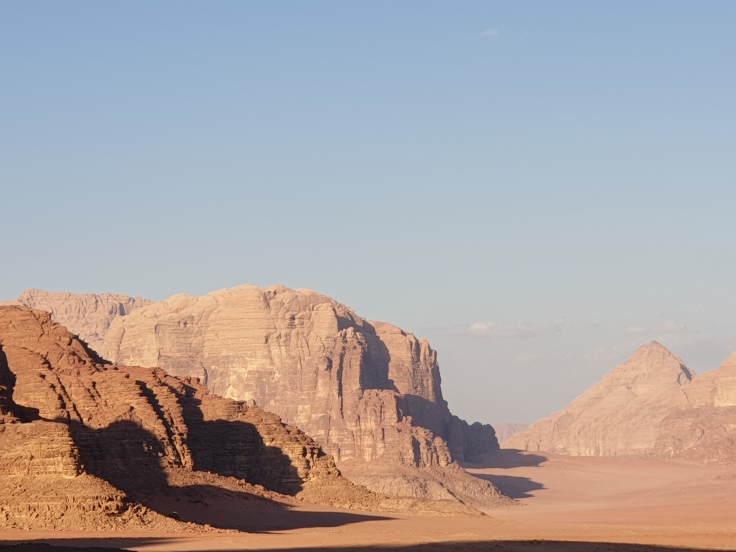 Finally at 4pm the driver stopped, lit a small camp fire and brewed tea, which we drank whilst watching the sun set in the west (over Egypt).

On the way back, the sky turned orange, then red, then deepening shades of purple with the first evening stars. I arrived back at the camp around twilight and was lucky enough to see a brilliant bright shooting star crossing the middle of the sky.
There was another surprise before dinner – a demonstration of a Jordanian cooking technique, where food is put in a container buried in the ground over hot coals and left to cook for 2 hours. I saw a big platter of food being recovered from the sand and placed directly on our restaurant’s buffet table. 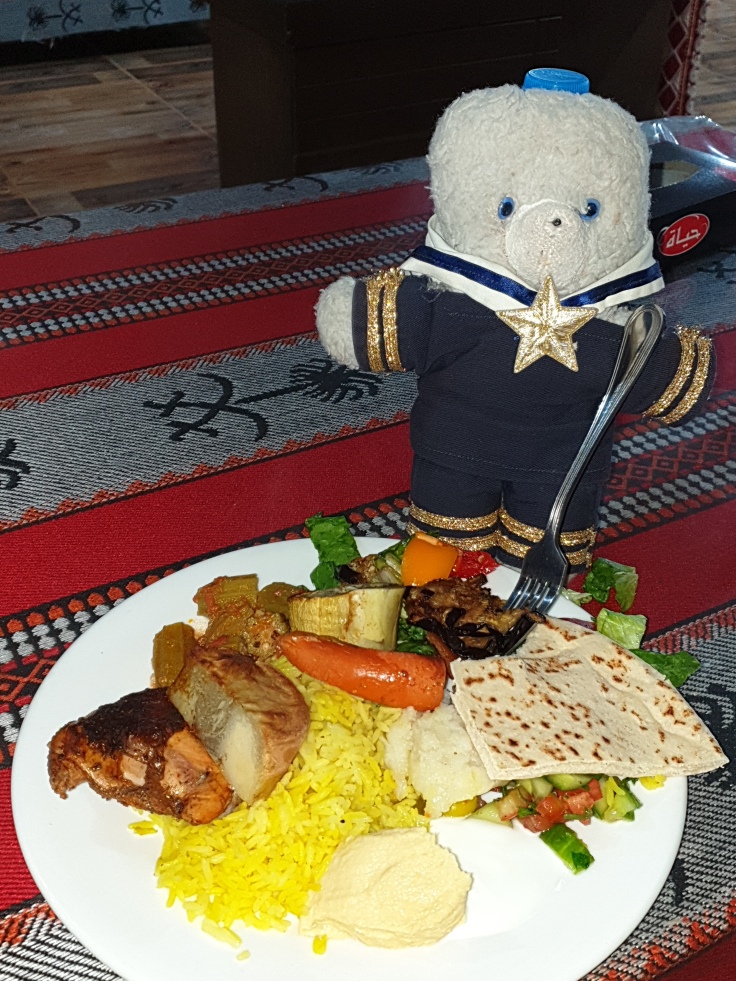 Like yesterday, the food was delicious and with a very full tummy I settled down to write my blog, enjoy the campfire, and then admire the night sky before bedtime.