I slept really well and woke up to breakfast and the spectacular view of wadi. I then set off on the short drive to Petra, making a couple of stops on the way.

The first was the crusader castle of Shobak. In any other country this would be considered a really impressive castle, but compared to Karak, it was smaller and less well preserved. I still enjoyed exploring the ruins and admiring the view of the desert. 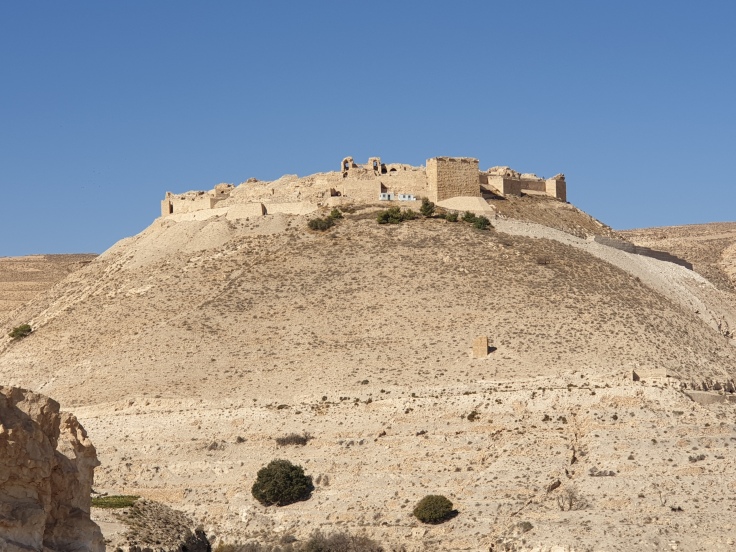 Next stop was Little Petra, a small isolated place just outside Petra itself. Like Petra there are houses and tombs carved into rock, with a narrow path through a cleft in the mountain to get to them. Unlike Petra, there was almost no-one there. I enjoyed clambering up and down steps leading to ruined ancient cave-houses and exploring the rocks and desert just beyond the main buildings.

Finally, I arrived in Wadi Musa, the modern city built next to Petra, and checked into my hotel, which had a very nice roof terrace with a view. In the early afternoon I set off for Petra itself, full of anticipation. The entrance to the ancient city is amazing – a 2km long narrow path, called the Siq, weaving through a natural cleft in the mountain. The walls are very high and often close completely over the path, blocking out the sky.

At the end a clearing opens and directly opposite is the Treasury, a magnificent building carved into the rock and one of the most photographed ruins on earth. It was originally a tomb of one of the Nabataean kings.

The Nabataean starting building Petra around the 1st century BC and the city flourished for several hundred years, including under Roman occupation, until it was abandoned. It was only rediscovered by westerners in 1812. The entrance to Petra is an exceptional experience, but the atmosphere was slightly spoiled by the crowds and the steady flow of horses and donkeys transferring lazier tourists, and the Treasury area stank of horse, donkey and camel.

Fortunately, I discovered that Petra is not just the Siq and the Treasury but an entire city spread out over a huge area, all of it protected by steep mountains. I wandered around the part closest to the Siq and admired the impressive royal tombs, which glowed a spectacular red in the late afternoon sun.

Then I tried to take one of the mountain trails around to “Petra city centre”, where there were more ruins, but I had just climbed the first long set of steps in the cliff when I met a local woman who made me go down again because night was falling and the site was closing soon. Back at the Treasury I was pleased to find that the donkeys, horses and camels had now gone, as had most of the tourists. So I had a drink in a café and enjoyed this special place in the calm of the early evening. The walk back along the Siq was much more pleasant without all the bustle and smell of the afternoon.

That same evening I had booked a ticket for a night-time visit to Petra, so I dropped into a restaurant near the entrance and had a big plate of lamb and rice whilst I waited for the tour to start. Despite this night-time visit being very popular, with a big crowd of tourists, it was even better than Petra during the day – the path was lit by hundreds of candles creating a special atmosphere. Being a small teddy bear, nobody noticed when I sneaked ahead whilst the guide was giving a long set of instructions to the group and so managed to have the Siq almost to myself on the way in. At the end of the Siq, the group sat down in front of the Treasury and listened to Jordanian music in the dark. 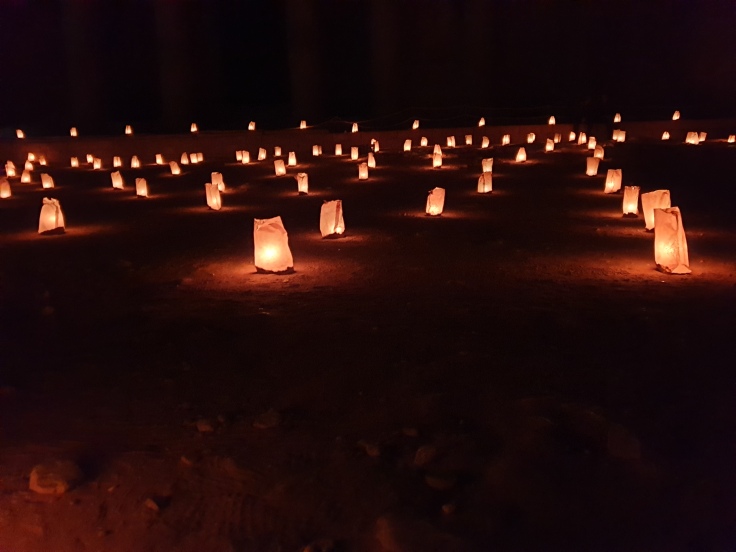 Then suddenly the Treasury was lit up and everyone scrambled for their cameras! After admiring another aspect of this famous sight, I walked back along the Siq to my car a happy, but very tired teddy bear.

One thought on “From Wadi Dana to Petra”