My second day in Jordan was a nice mixture of religious discovery, historical site and spectacular sightseeing.

I first started by heading north of Madaba to Mount Nebo. Mount Nebo is where Moses is said to have seen the promised land before he died. And the view is quite impressive.

Today it is a religious and pilgrimage centre with a Franciscan church surrounded by Olive trees. The church house yet more mosaics……… Although I thought I was saturated by them at Madaba I found one really exceptional called the Mosaic of the Diakonikon which dates back to 530 AD which represents hunting scenes and trees of life.

I then took the road again in the direction of the South for my second stop: Karak. Located on ancient caravan routes between Egypt and Syria, Karak is also mentioned in the Bible. Here the crusaders built a huge castle that resisted several sieges before being taken by Saladin in 1183.

The place is now a huge warren of underground passageways and stunning view of the surrounding countryside; I spent a happy hour trying to find all the highlights mentioned in the guidebook in this maze, and not quite succeeding.

From Karak I continued South through some spectacular desert mountain scenery. As the sun set the sky turned a deep blood red, so intense that I thought I could cut a piece with my knife. 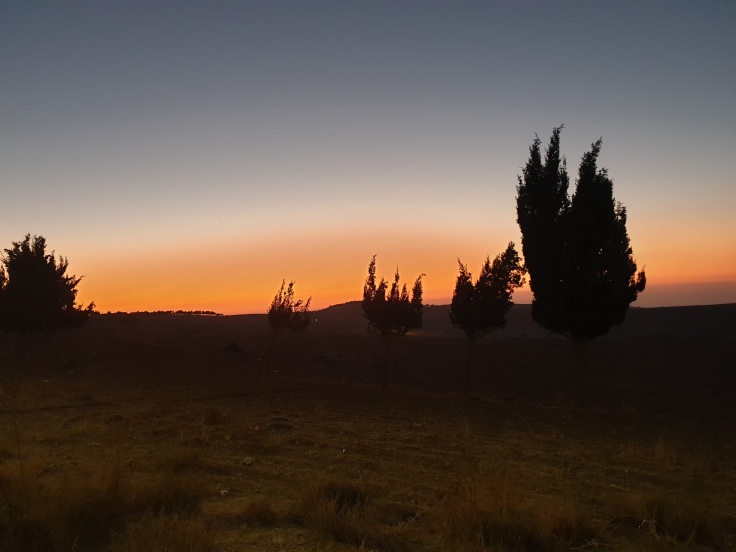 This strange red light lit up a deep valley to the right of the round, which was where my destination, Wadi Dana, awaited. I finally arrived just as a night fell and had to leave my car to be driven over bumpy track to my tent in the Dana Eco camp. They served the ubiquitous chicken and rice for dinner and then I bedded down to a chilly night in my thermal ski underwear (its cold in the desert mountains at night).