I had booked a tour to visit the areas surrounding Yazd with a guide called Ali. We were accompanied by two fellow frenchies who were very friendly. They were staying in a hostel called Sunny Hostel but ironically they were given a basement room with no window!

Ali first drove us 70km North of Yazd to Kharanaq, a deserted mud-brick village overlooking the valley that emerged over a thousand years ago. The small agricultural settlement would have been encircled by fragrant apple, pomegranate and mulberry trees. What now remains of this ghost town is a Qajar-era mosque, a cylindrical 17th century shaking minaret and a caravanserai near the entrance of the village. A caravanserai was used to load and unload camels and give them time to rest and rehydrate before undertaking long journeys in the desert carrying goods across the land. Traditional mud walls are restored once every few years so as to withstand the elements, but since this part of the village has long been abandoned, the majority of the walls are left to crumble away. I had to be careful when walking around as there were some huge holes in the ground and some of the stairs had seen better days! I then walked through some wheat fields and the view of the mountains was beautiful. 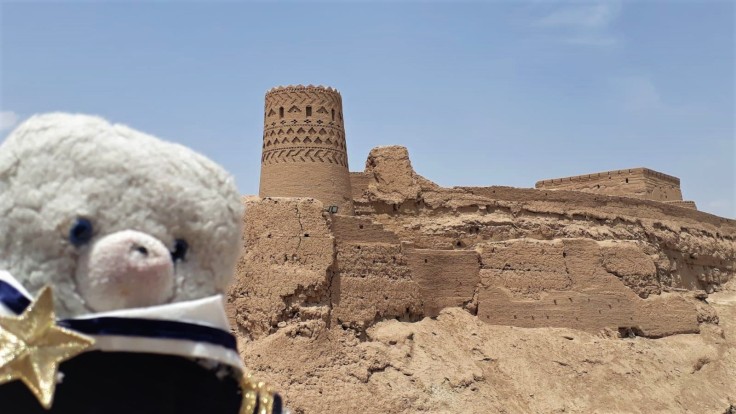 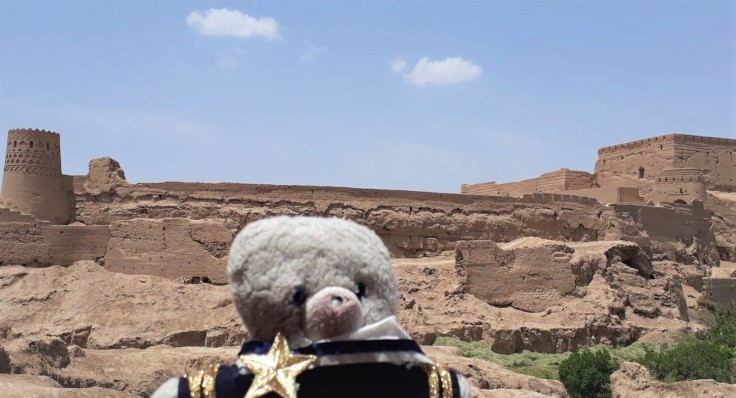 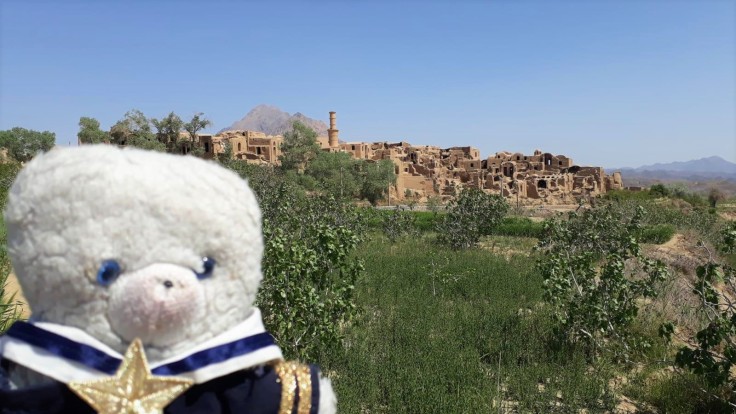 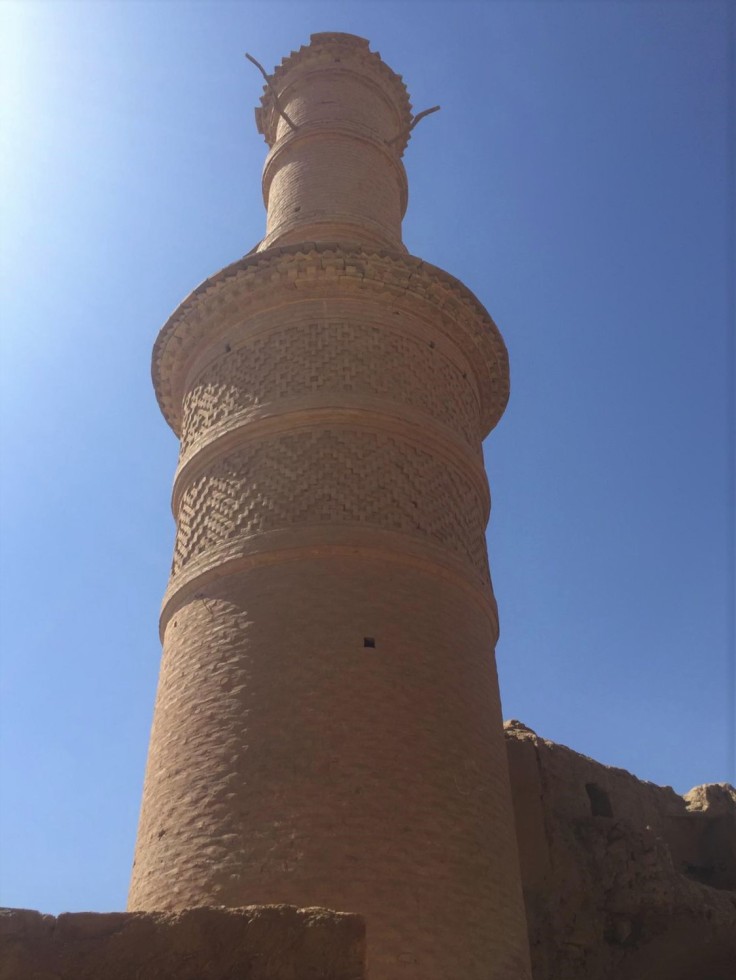 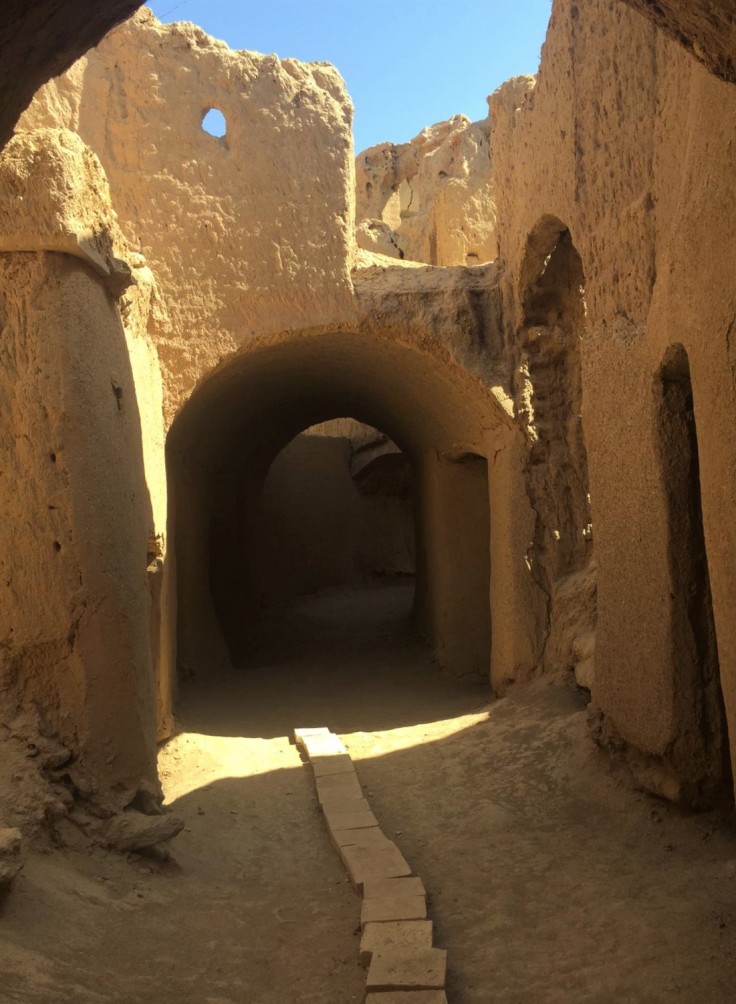 Our next stop was Chak-Chak, one of the most important of five Zoroastrian holy sites known as the Five Pirs, nestled into the steep face of an isolated mountainside. Legend has it that after the Arab invasion in AD 637, the Sassanian princess Nikbanuh (the second daughter of the last Sassanid King, Yazdgerd III) and her family fled. The princess became separated from them, and  short of water and desperate for safety, she turned to Ahura Mazda, the Wise Lord of the Zoroastrians, for salvation. As she knelt in prayer, the mountain miraculously opened and sheltered her from the invaders. Inside, she heard  the unmistakeable noise: ‘chak, chak’, meaning ‘drip, drip’. This, so the myth goes, is how the site got its name. 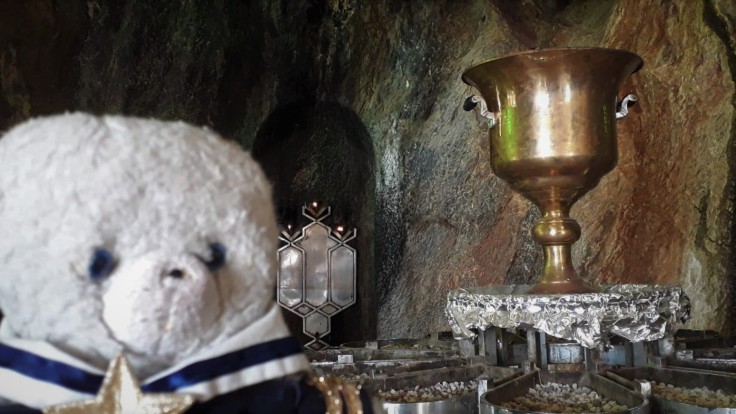 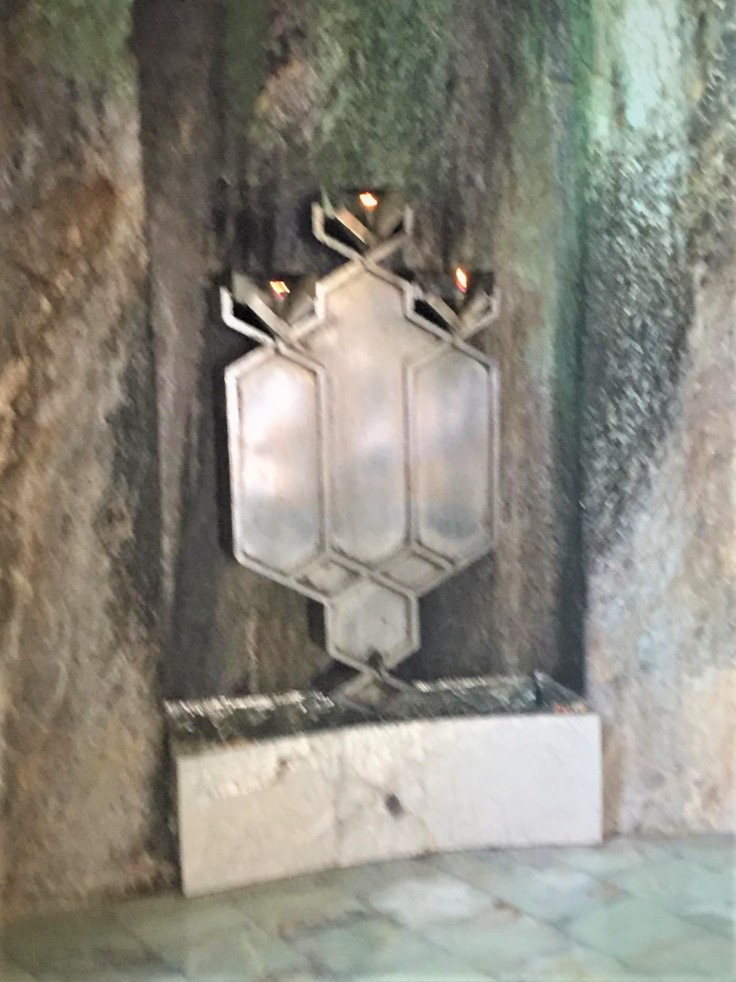 The Pir-e Sabz Fire Temple forms the main focus of interest. Reached by 230 steps (I took a few breaks along the way to admire the view and catch my breath!), you can really appreciate the isolation that marks this spot. I was exempt from taking my shoes off as I don’t wear any, and then went inside the cave where an eternal flame is kept alight as per the Zoroastrian religion. It felt peaceful and calm and I can understand why it is a place of worship and indeed from the ceiling was a constant ‘chak’ of water. 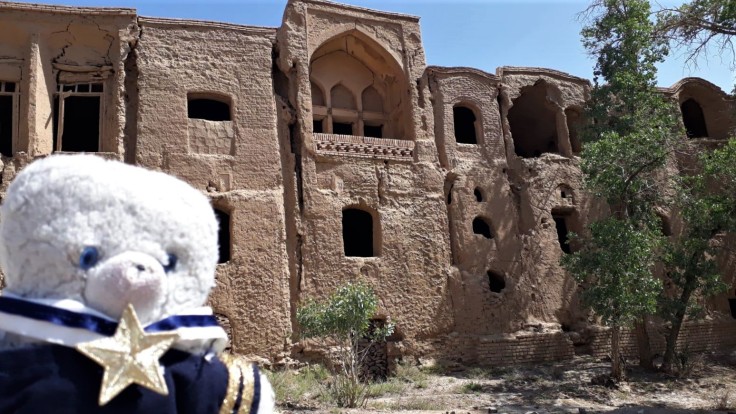 We then headed over to Meybod Yakhchal, a 400 year old structure opposite the former caravanserai. It is one of the most impressive ice houses in Iran. The enormous, meticulously built mud and brick building consists of two shallow icing ponds where water freezes in the winter, tall 2m-thick walls that prevent the sun reaching the icing ponds, a pit for storing the ice from those ponds and a dome to shelter from the summer heat.

By this stage it was getting very warm and Ali drove us to an ice cream shop. I had blackberry and mango ice cream and it was delicious and refreshing! We then drove back to Yazd as the french couple had a bus to catch. This left me most of the afternoon free to finish visiting what I hadn’t done the previous day. I wondered around the little streets and admired the various handmade fabrics. The sewing skills, passed from generation to generation, is impressive in its details, and the Yazd silk pattern is called ‘termeh’, using gold and silver thread.

Late afternoon I went to Bagh-e Dolat Abad, once a residence of the Persian regent Karim Khan Zand. This small pavilion, built around 1750, is set amongst UNESCO-listed gardens. It is clearly a picturesque place as I saw some students getting their graduation pictures taken there! The pavilion also boasts Iran’s highest ‘bagdir” (wind tower) standing at 33m tall, rebuilt in the 1960s. The gardens, built on the traditional Persian principle of symmetrical design, is planted with evergreens and dotted with sour orange and pomegranate trees. 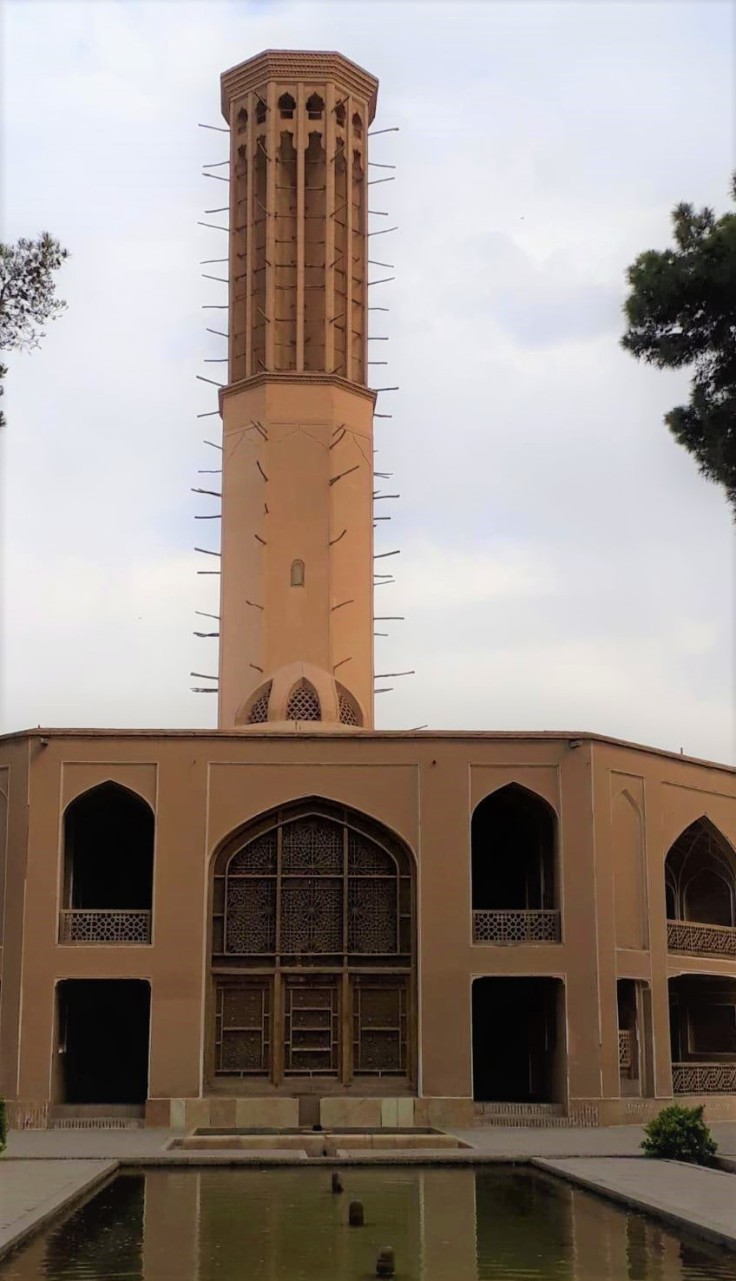 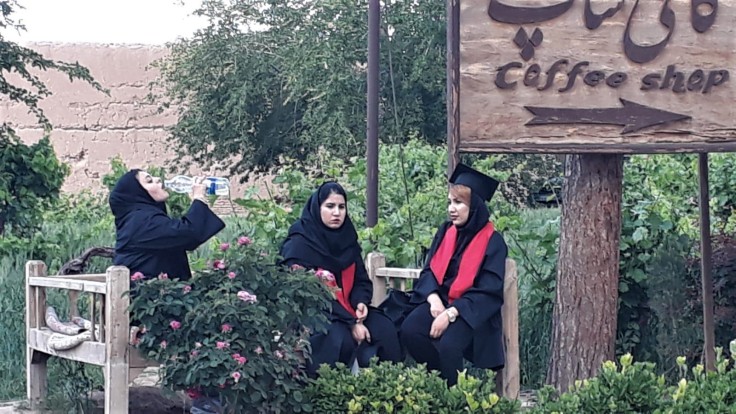 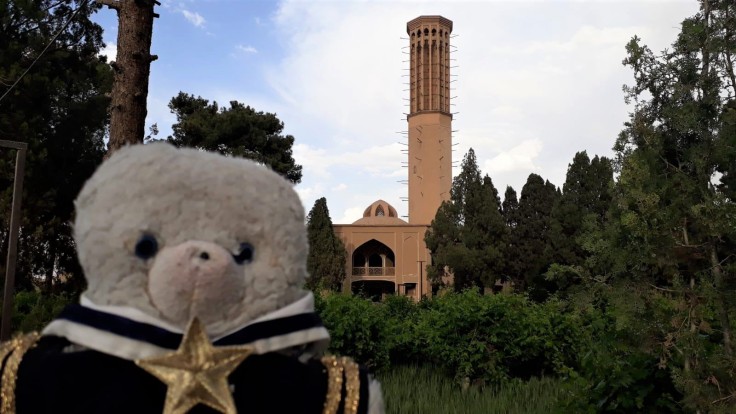 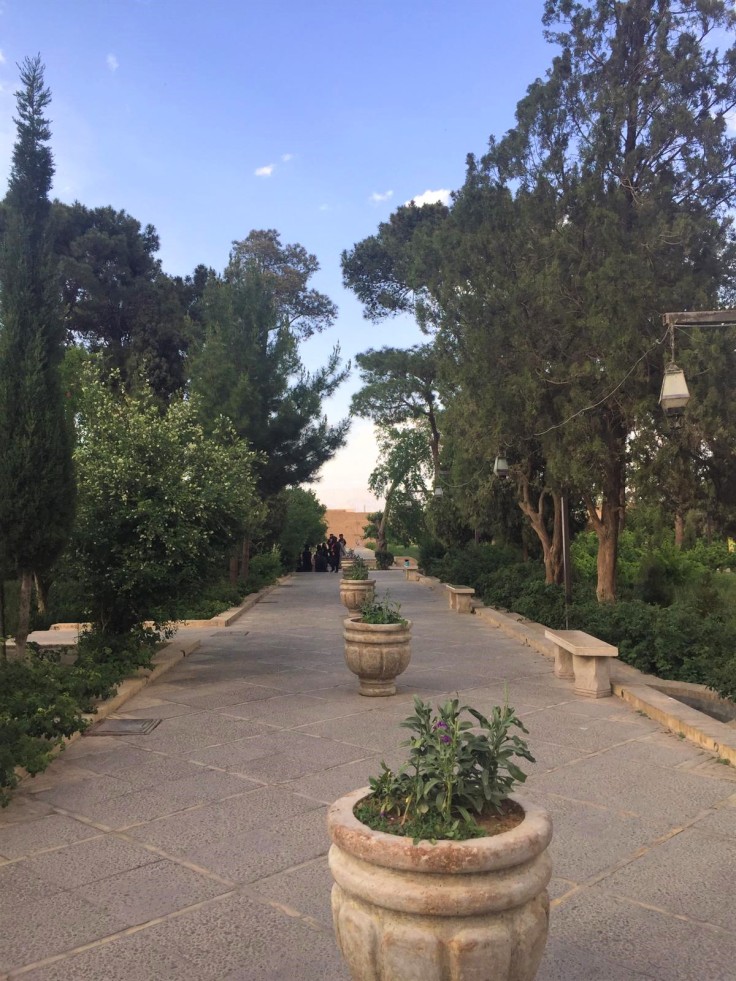 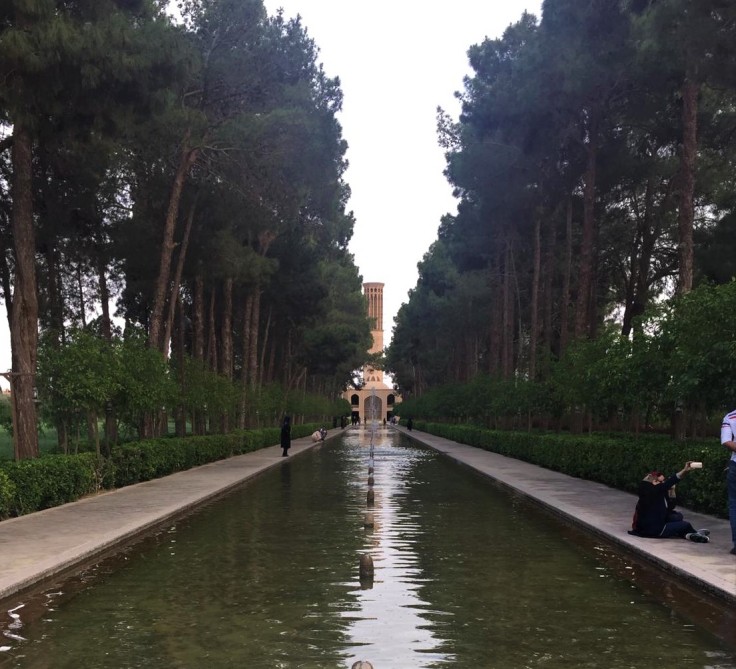 I was told that the first gardens in history were called ‘pardis’ in the early Iranian language of Pahlavi – it is translated as ‘around the house’ and it is the root of the Indo-European word ‘paradise’. The Greek word ‘paradeisos’ was first used by Xenophon to describe an enclosed park, orchard or hunting preserve in Persia. There are several features to a Persian garden: it is divided in four quarters, there is always a water feature in the centre, the trees are symmetrically aligned and the garden is a enclosed by walls. Therefore, using the expression ‘gardens of paradise’ is in fact a pleonasm!

Time for a refreshment! I found yet another rooftop with a view on Masjed-e Jameh and I had a mint and lemon drink. The weather started to change and soon I saw lightning and a thunderstorm started. Luckily I was sheltered but I did get bitten by a few hungry mosquitoes! 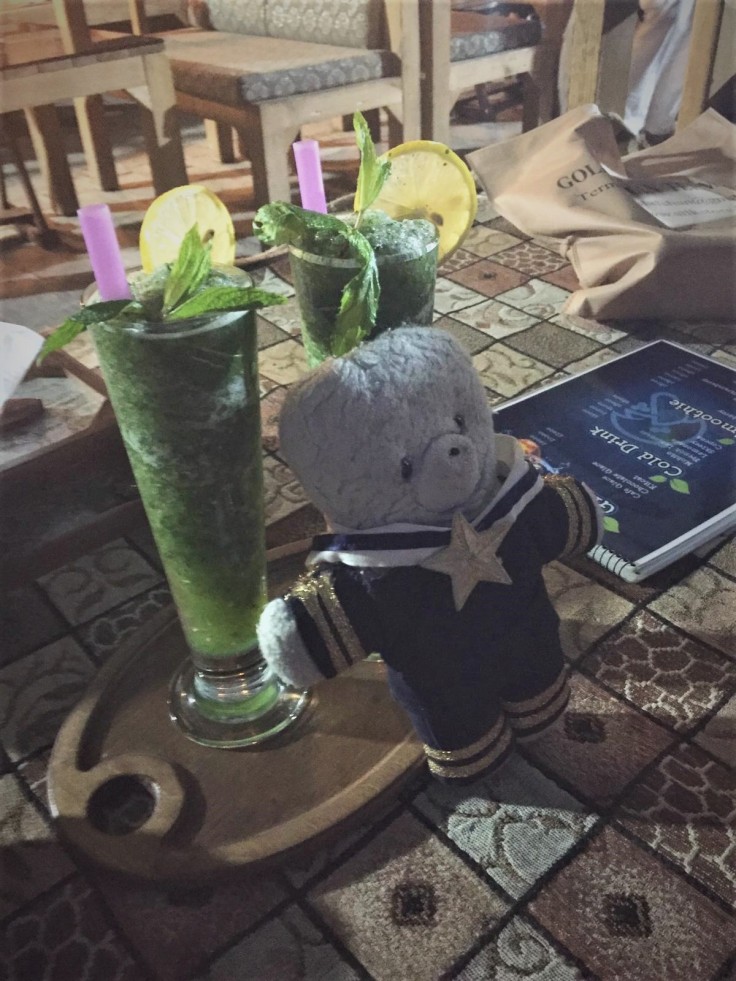 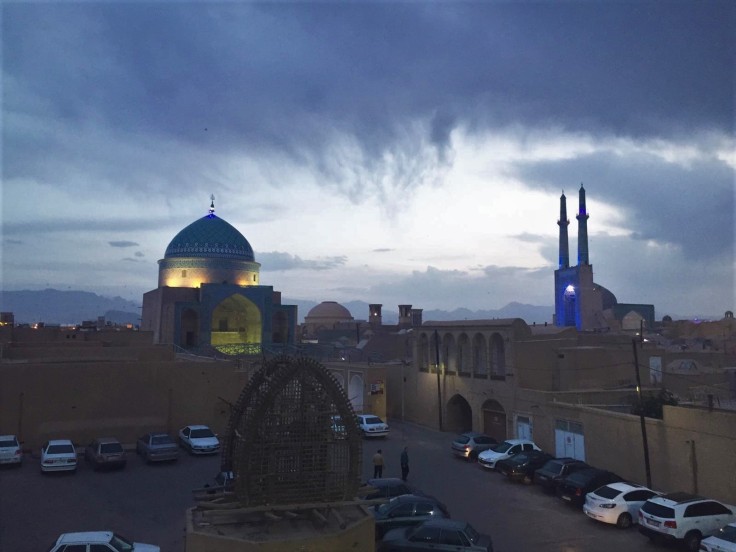 Off to bed as I am being picked up in the morning to go to Toudeshk, a small village en route to Esfahan. I will be staying in a traditional Iranian guesthouse and will tell you all about it in my next post!