This was my last morning in Petra, and Lonely Planet said I should visit very early and see the sun sliding down the front of the Treasury in the early morning. As I said in my earlier post, the Treasury is actually a tomb, but got its name from a legend that an Egyptian pharaoh had hidden his treasure there. I got up early, had a quick breakfast and was at the entrance to the Siq at 7am. Even though this was my sixth time traversing the Siq, the early morning walk down into Petra was very pleasant without the big groups of tourists or the horses. When I arrived, the Treasury was in shadow, so I went to admire Petra’s huge theatre in full morning sunlight before returning to grab one of the few benches facing the Treasury, and watched as the direct sunlight slowed slipped down its façade, successively highlighting different elements of its decoration – plinths, columns, human figures and finally the entrance itself. 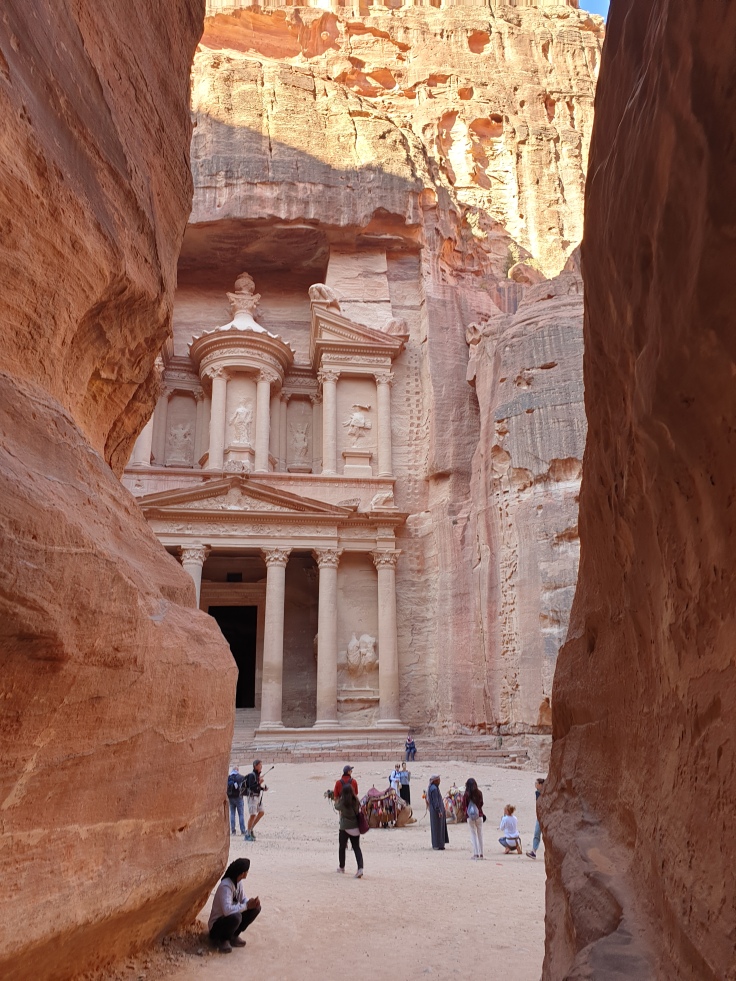 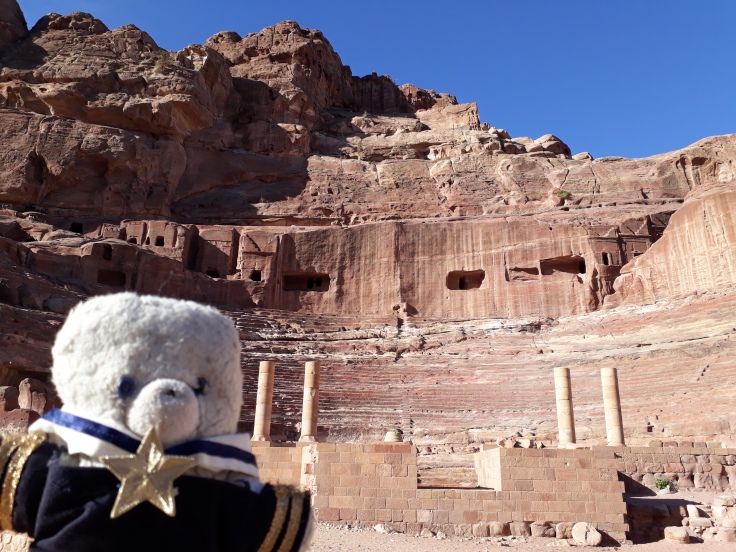 After 30 minutes the whole front of the Treasury basked in brilliant light and I decided it was time to go. 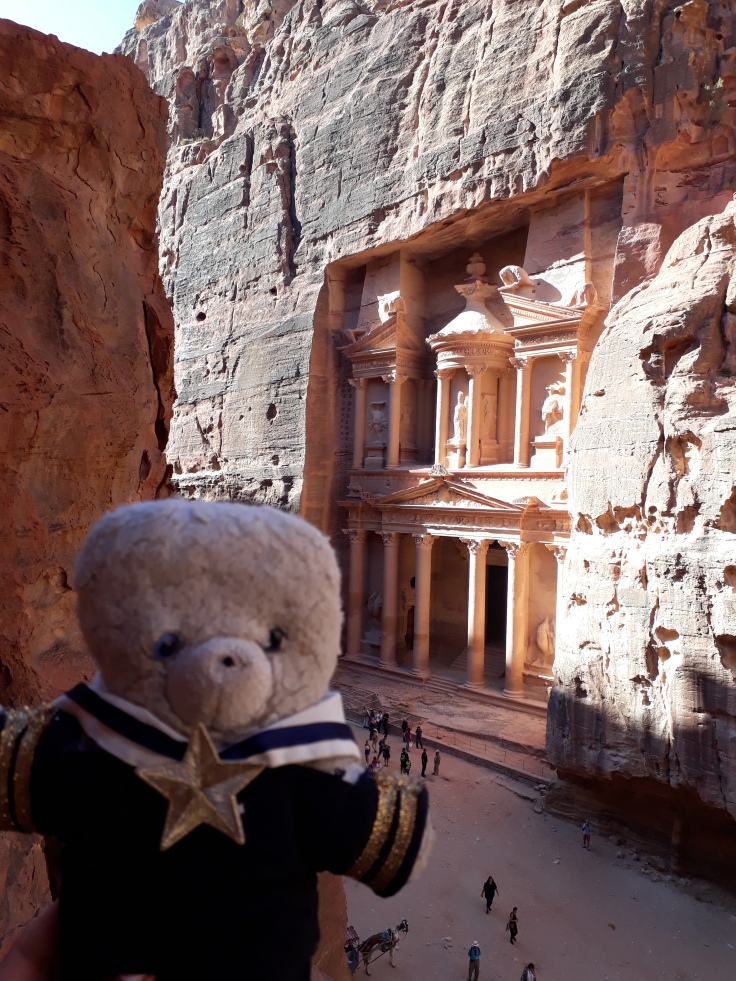 I returned to the hotel and packed my bags for my next destination, Wadi Rum, an area of desert at the border with Saudi Arabia made famous in the west as the base of Lawrence of Arabia when he was helping the local Arabs fight their Turkish occupiers during WW I. I arrived early at the Visitors’ Centre at the park entrance and calculated that I had time to do the interesting-looking short hike described in Lonely Planet as easy and not needing a guide.
I headed off in the afternoon sun towards a striking rocky outcrop names the Seven Pillars of Wisdom, in honour of Lawrence’s book.

There wasn’t a marked trail so I followed the boot prints of other trekkers in the sand. This strategy worked until I got to the rocks, where I had to search hard for the correct route through the boulders. The path led into a gorge – the footprints had disappeared but occasionally little piles of stones left by other walkers suggested that I was going the right way. It was hard work for a little teddy bear scrambling over the big rocks, and the local flies – who had never tasted teddy bear before – were very annoying. After 90 minutes hard trekking in the sun I was doubting Lonely Planet’s advice and also worried I might have gone the wrong way.

My efforts were finally rewarded however when I clambered up yet another narrow gorge and a grandiose vista of the desert opened up, with sharp rocky mountains rising vertically from a sandy plain.

I found myself on top of a dune of brilliant red sand, which was easy to slide down, but then a little further on I had to climb up a different dune, and that was really hard work. Every step forward either my little legs would sink in up to my waist, or the sand would give way and I would slide back two steps.

Also I still wasn’t sure I was going the right way, but trusted the footprints in the sand that had now reappeared. I finally made it to the top of the dune and was relieved to see that by staying in the sand I could probably navigate around the massive Pillars of Wisdom and back to the Visitor Centre. I was quite relieved when the latter finally came back into view and even more so when I regained the comfort of my car. The walk had taken me about three hours, much longer than I expected.

I drove on into the national park to Wadi Rum village to meet Saleem, the owner of the camp where I was staying. There I parked my car and jumped into his 4×4 pick up truck for the ride to his camp site. There are lots of Bedouin camp sites in Wadi Rum where tourists can stay. Mine – the Wadi Rum Quiet Village – was at the foot of a tall cliff, with a great view into the Wadi Rum plain. I was very pleasantly surprised by my tent – big, comfortable and very clean. I was even more amazed that the camp had wifi and solar electricity.

I arrived just as the  sun was setting and the staff has stated up a nice camp-fire where people could relax and drink tea. Soon dinner was served with a big choice of salads and the ubiquitous chicken and rice. The restaurant tent was very comfortable and the food excellent.

After dinner I sat by the fire and enjoyed listening to one of the Bedouin playing the Oud (an instrument like a lute). 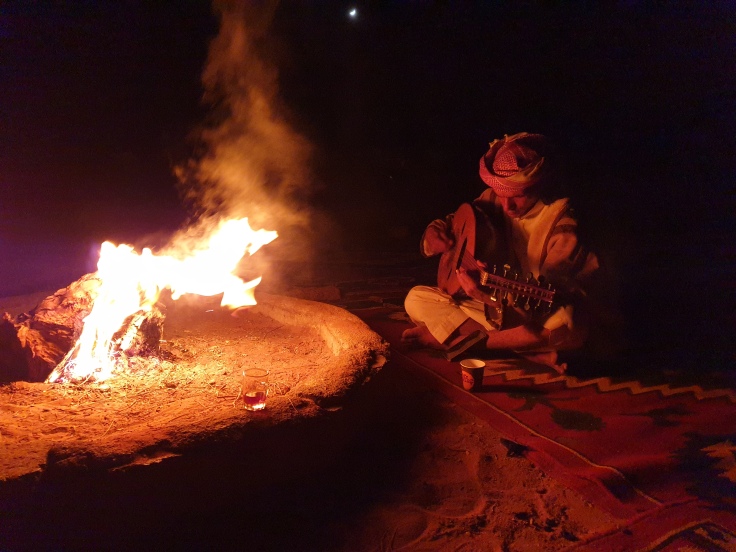