Time for Shiraz! Everyone I have spoken to has told me how beautiful it is. My night bus was a bumpy ride and I arrived at 6am on Tuesday. Luckily my hotel let me sleep on Iranian daybeds in the courtyard for a few hours despite my room not being ready yet. 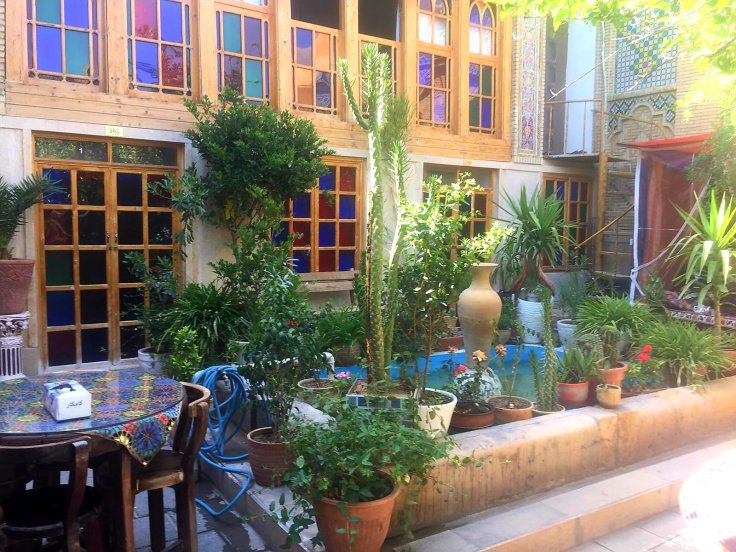 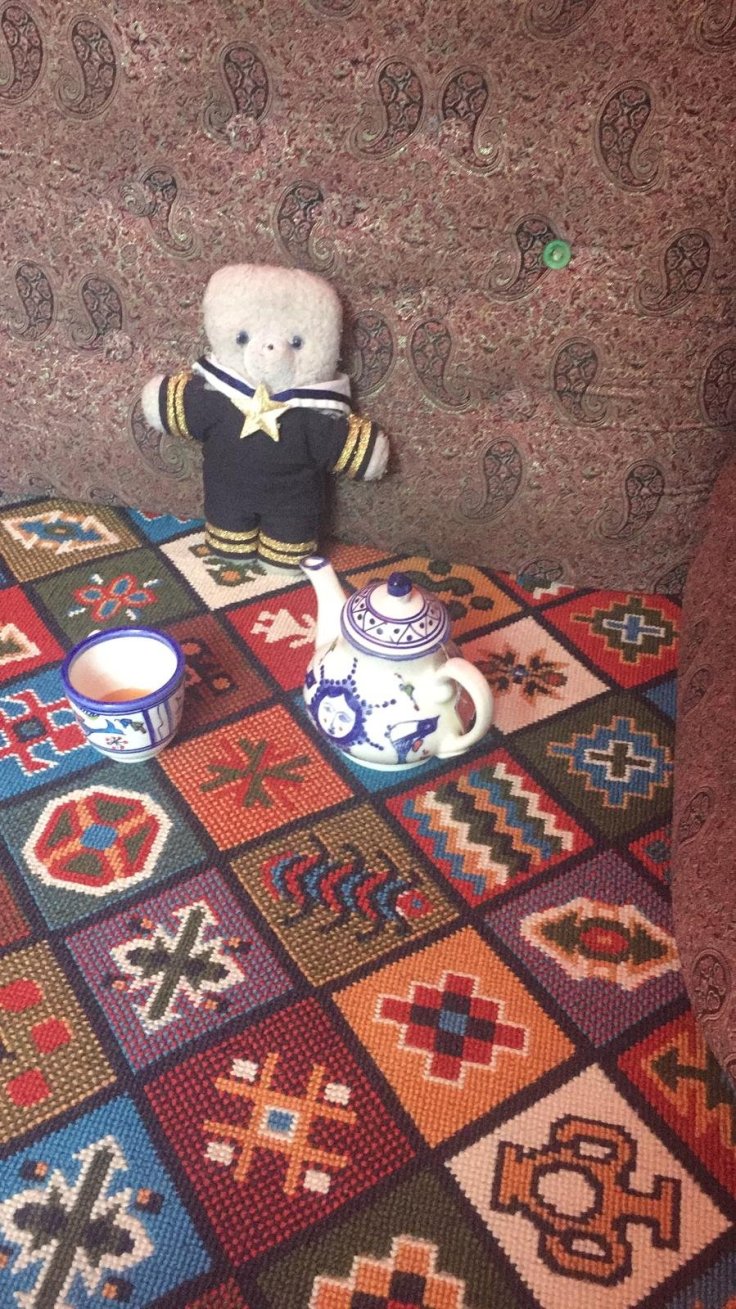 A little while later I went to the bazaar and as expected I got lost – although it is a lot smaller than the Bazaar in Tehran which is a complete maze! I stumbled across a street aligned only with shops selling gold jewellery – it was very impressive. I stopped for tea in a coffee house. Interestingly they have samovars here like they do in Russia and the name for tea in Farsi is the same as in Russian (chai!) 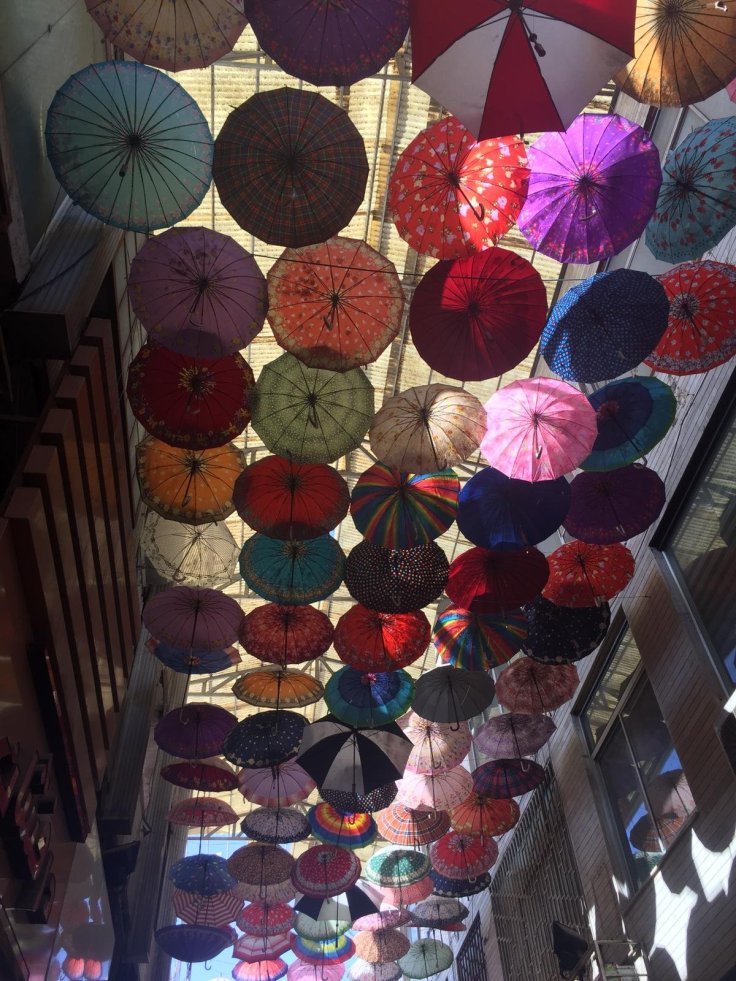 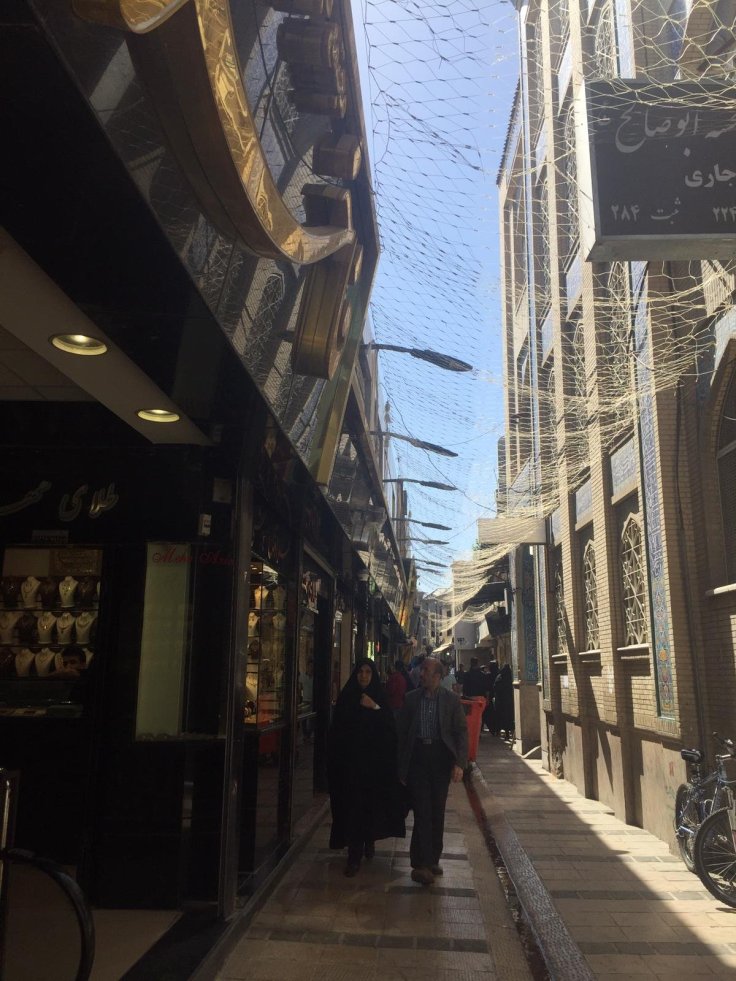 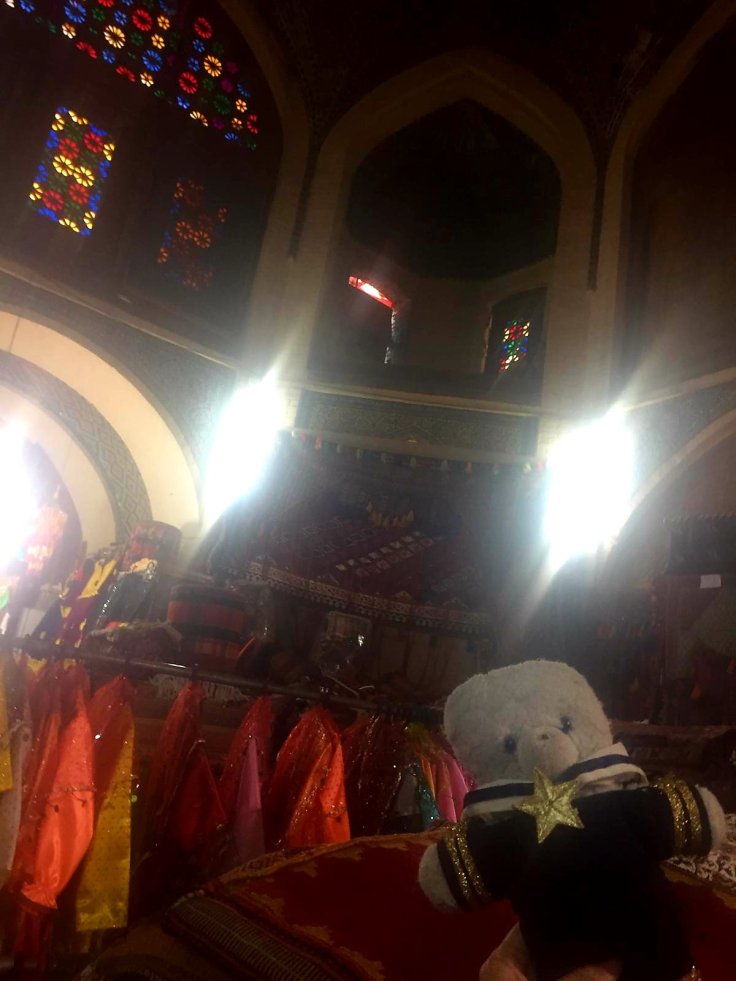 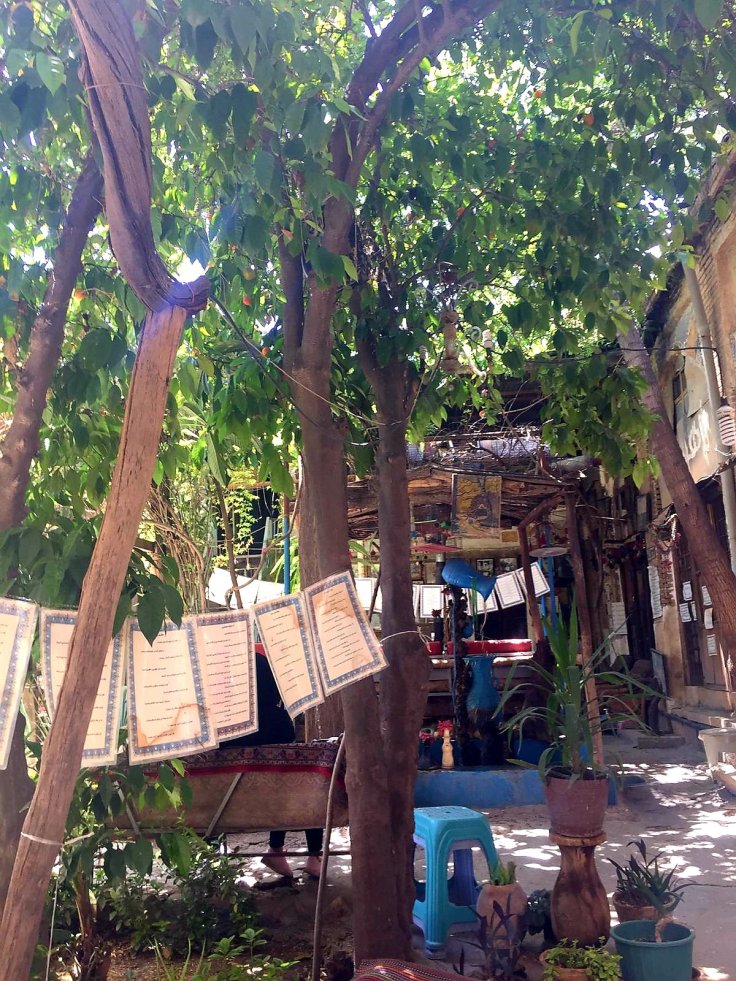 Before leaving I asked for directions to the owner but I am fairly certain that stall owners don’t even know where they are within the bazaar as I was given varying instructions from different people!

I then went to visit the beautiful Aramgh-e Shah Cheragh, shrine for Sayyed Mir Ahmad. One of the Immam’s seventeen brothers, he was killed by the caliphate on this side in 835 AD and his remains are buried there. In the second courtyard is a second smaller mausoleum which houses the tombs of the two brothers of Mir Ahmad. 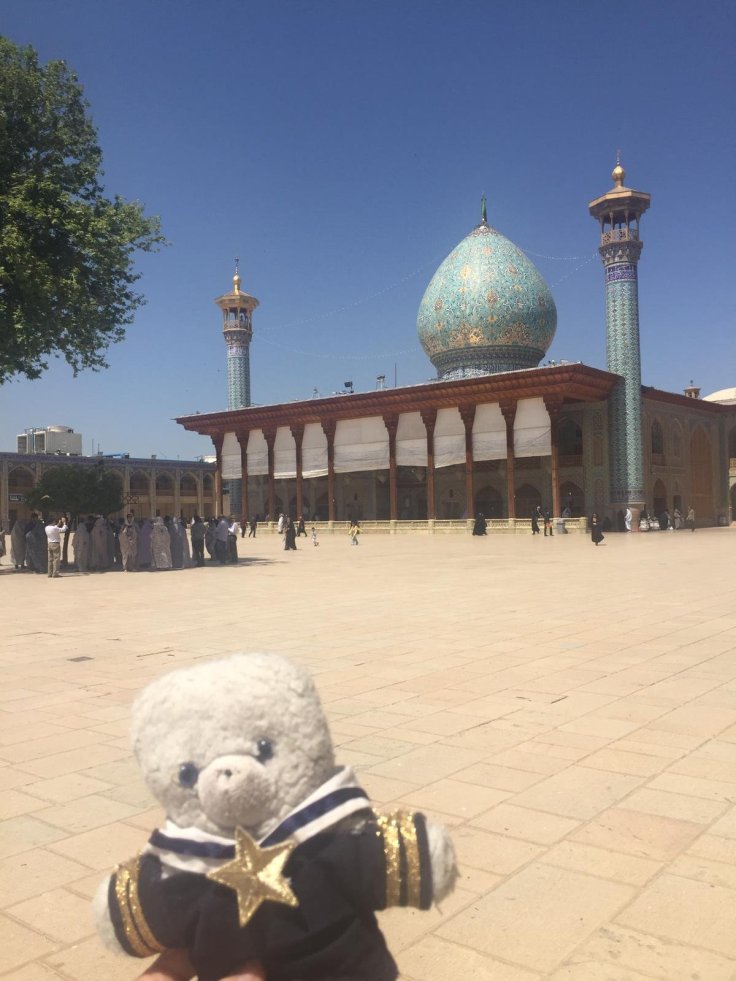 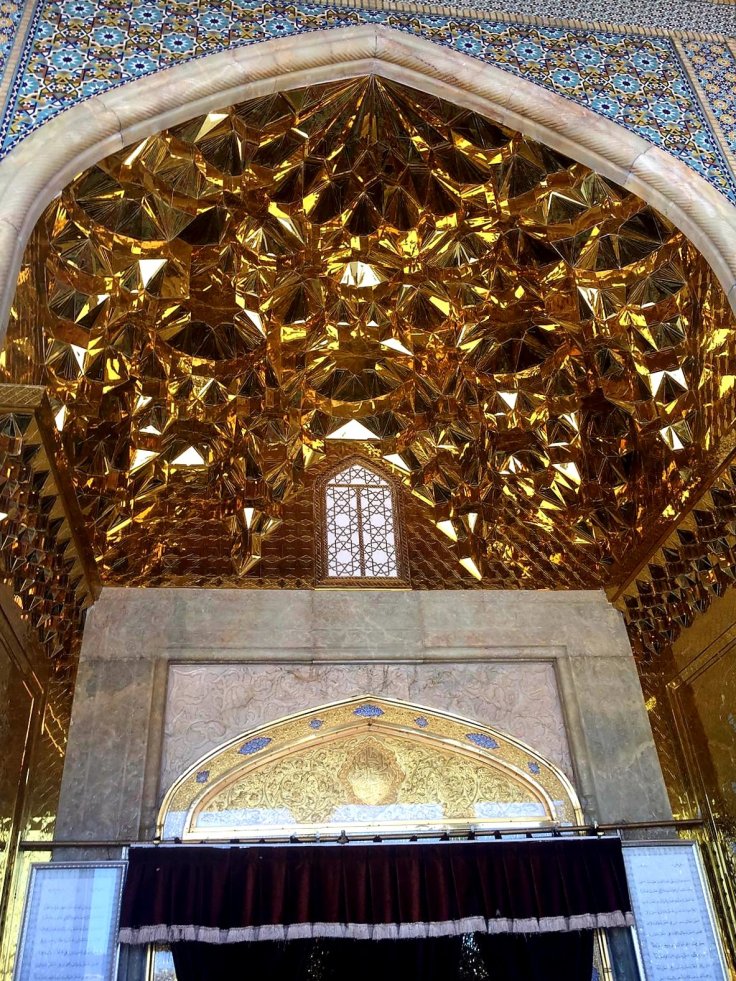 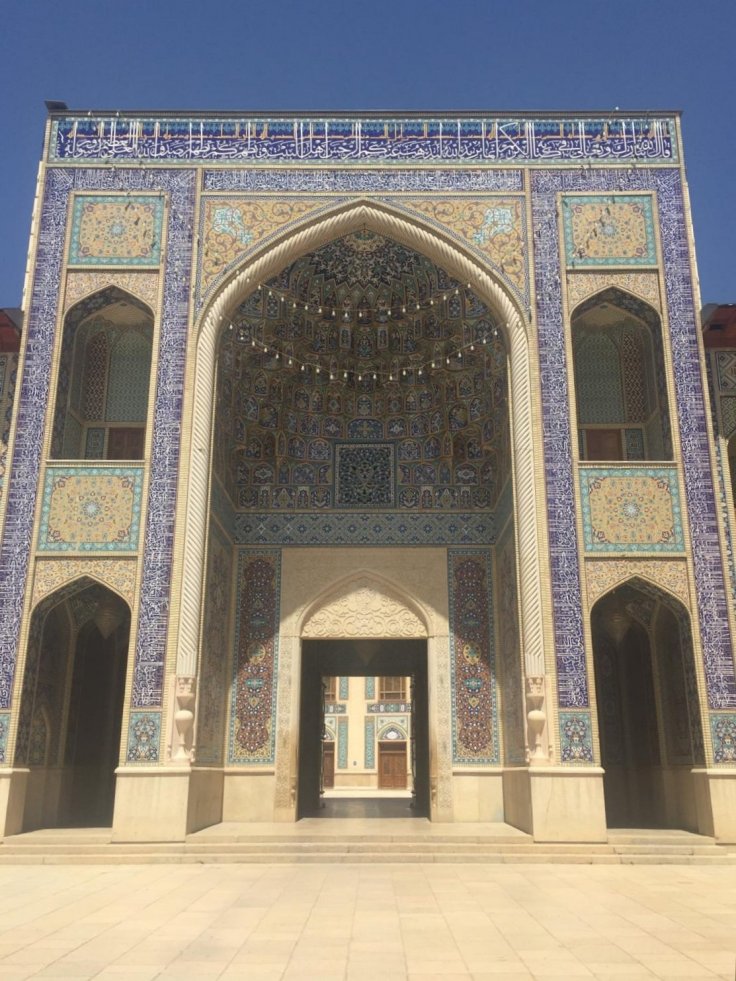 After returning to the hotel to check in and have a much needed shower, I went back towards the centre and went on the hunt for a bite to eat – it was mid-afternoon by that stage. I found a terrace and had a salad – as much as the kebabs and rice are delicious in Iran it was refreshing to have something green and light.

Following lunch, I went to the Pars museum across the square. This is where Karim Khan once received foreign dignitaries in the pavilion, and has beautiful stalactite ceilings and hand painted murals. I then went to the UNESCO-listed Eram gardens to relax, designed under the Qajar dynasty. They are also very pleasant to stroll in and are famous for their cypress trees, symbol of Iran. I was stopped by an Iranian English teacher who asked us if we could spend a few minutes chatting to her students to practice. After a couple of minute one of the mothers of the girls kindly invited us for dinner! Being invited by friendly Iranians to their house is starting to become a habit – and I am starting to run out excuses but I think communication would have been limited (unless the English teacher was there to translate!) 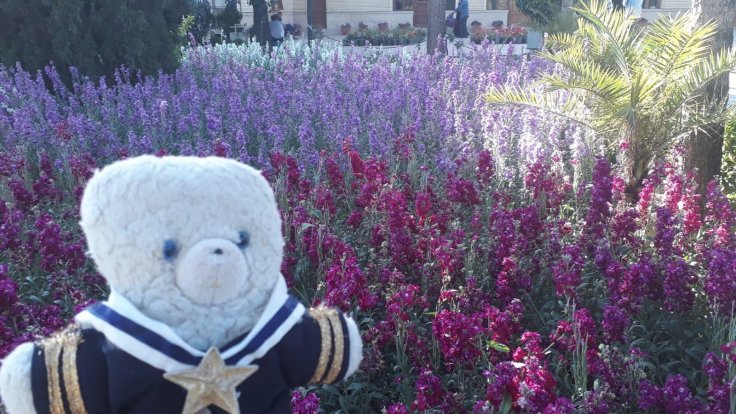 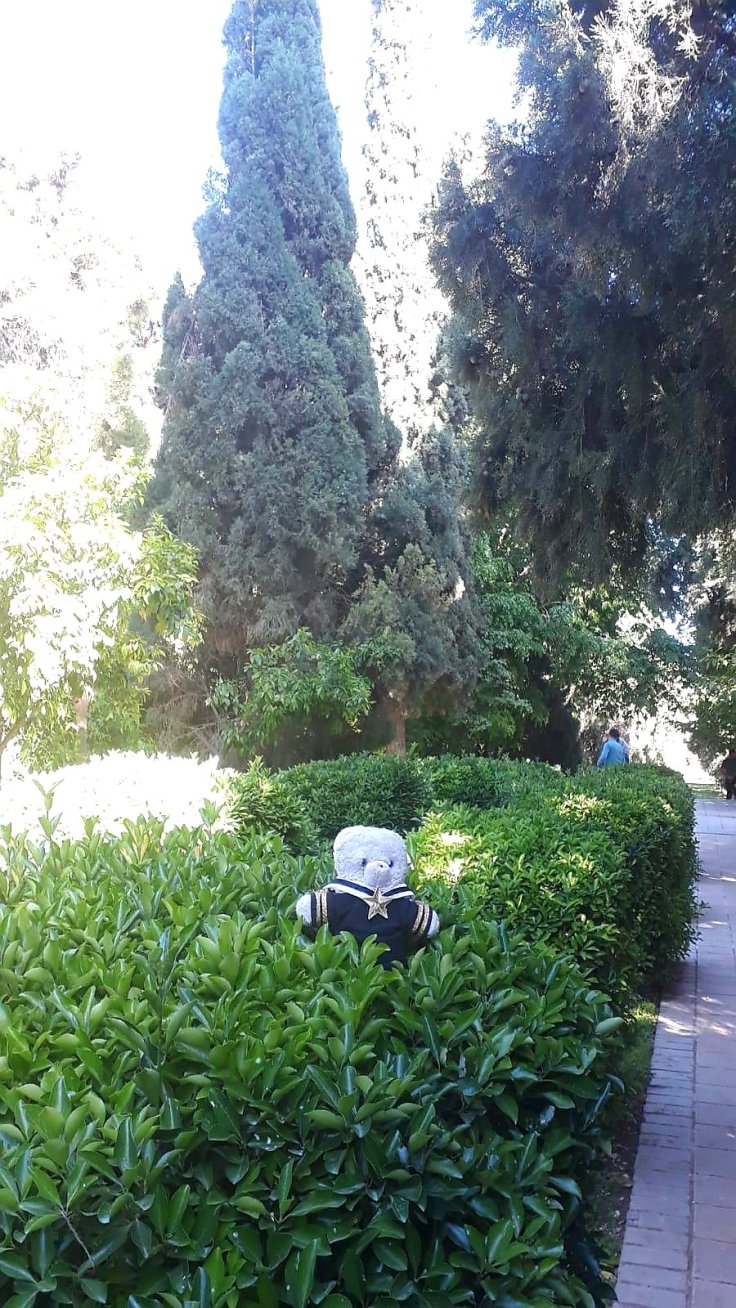 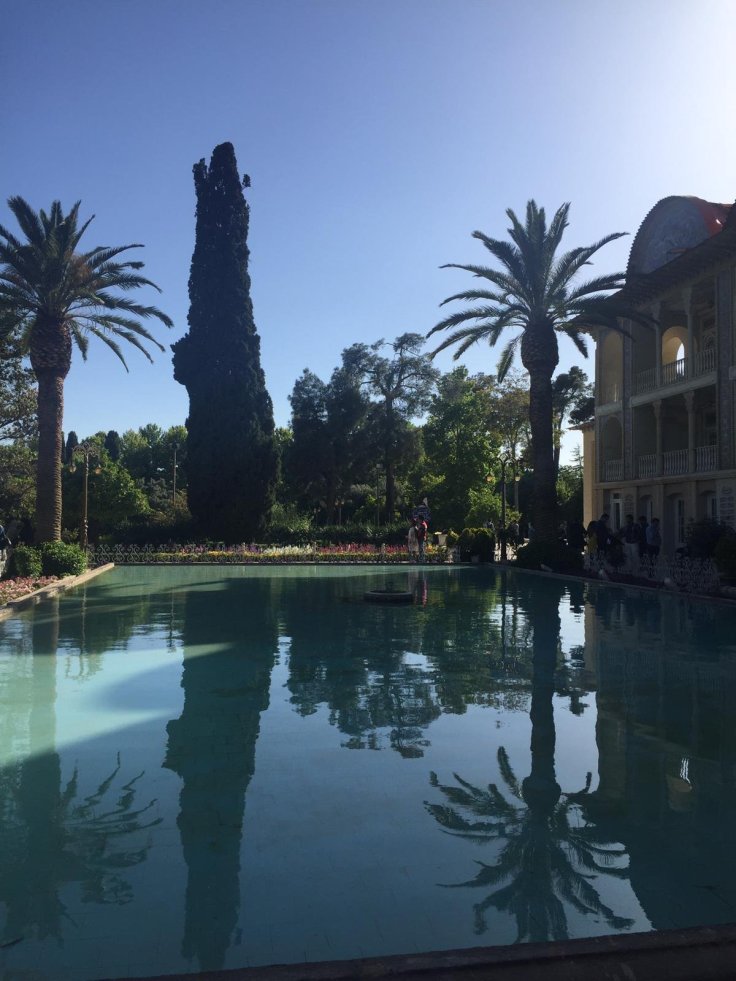 I headed back home to rest before deciding where to go for dinner. I chose a restaurant called Shater Abbas – it took me a while to find it as much to my confusion it had changed name since the guidebook was published but got there in the end. Before ordering the waiters brought some jelly and quince paste accompanied by fresh orange juice and I wasn’t sure if it was an appetiser as it was quite sweet but it tasted good nonetheless. The restaurant quickly filled up with a big gathering of Iranians taking up most of the venue – I assumed it was a last big communal meal before Ramadan starts this week end? I went back to the hostel and it was not long before I was in bed ready for a busy following day!

Wednesday morning I walked to the Masjed-e Nasir-al-Molk, know in English as the Pink Mosque. It was built at the end of the 19th century and its tiling is pink-ish as opposed to blue which is the case with most of the mosques I have visited so far. The highlight was taking a picture through the colourful stained glass with the sun streaming through. I clearly wasn’t the only one who wanted to take pictures! 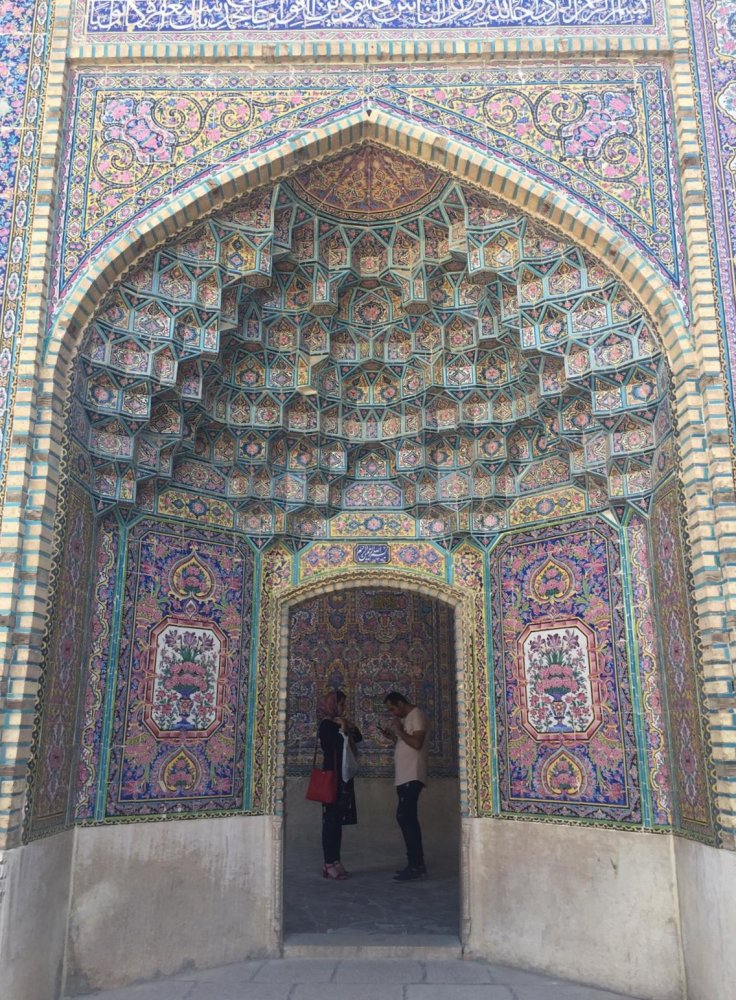 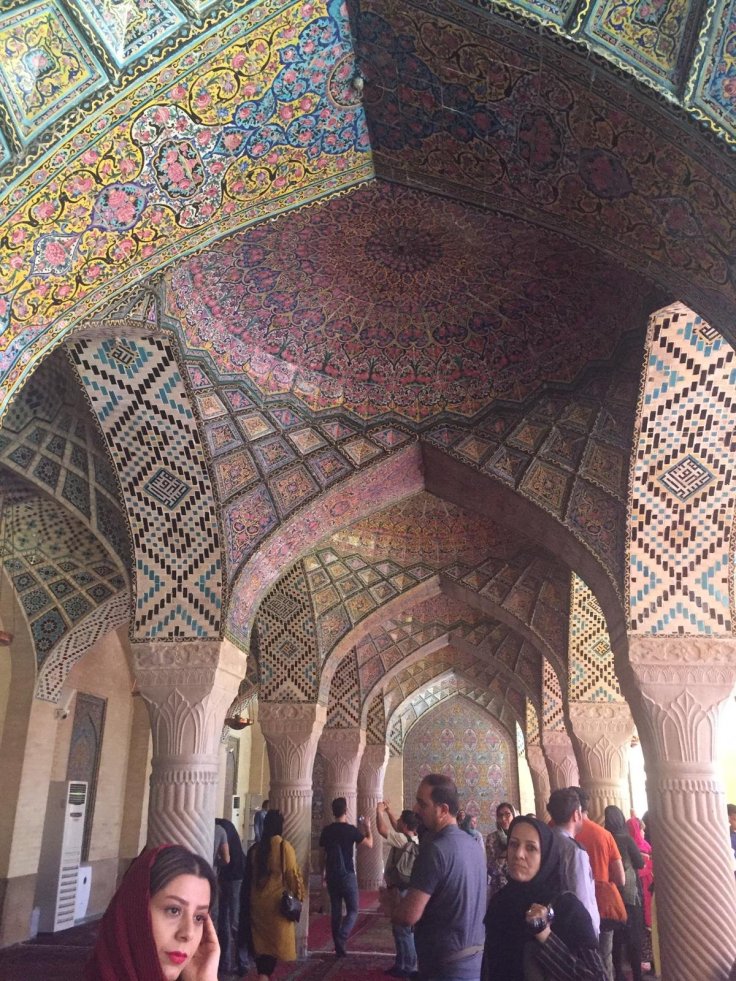 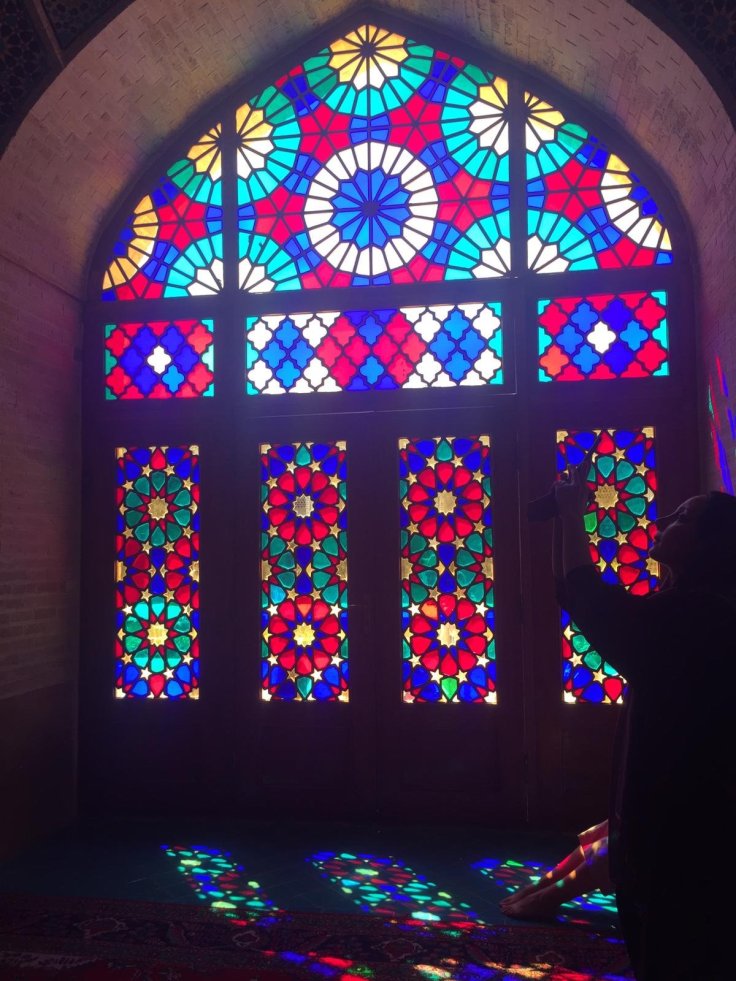 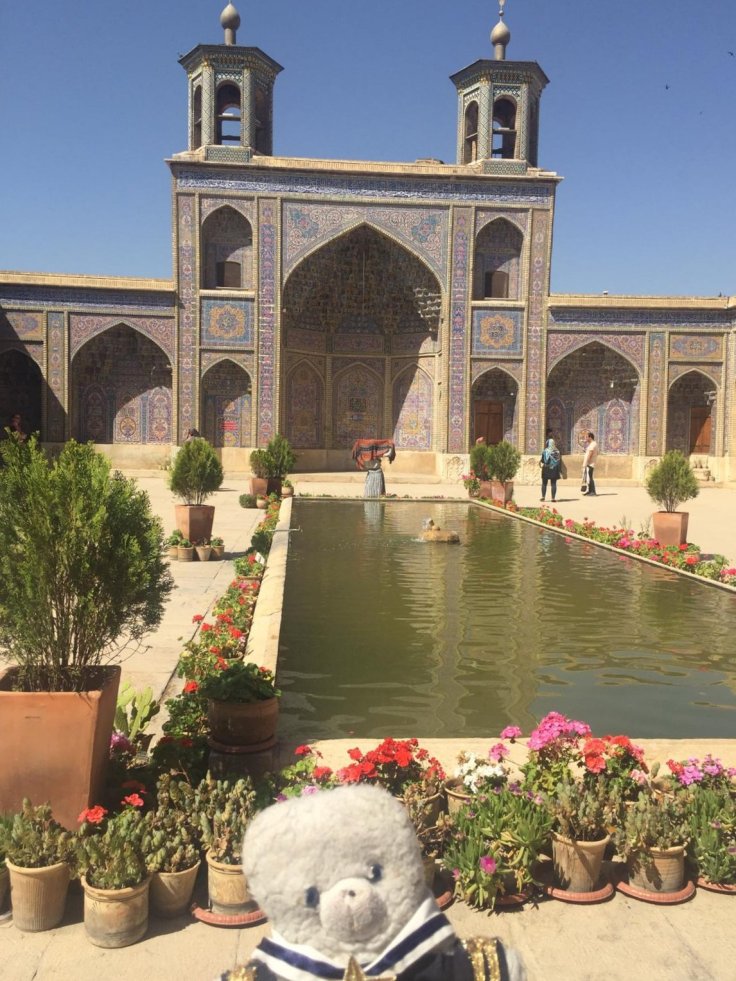 I then went to the Naranjestan-e Ghavam Pavillion which used to be owned by one of Shiraz’s wealthiest Qajar-era families. The entrance is of course mirrored and sparkly but the ceilings of the upstairs rooms are painted in European-style motifs. I had a break and tried a Shiraz speciality, faludeh – a frozen sorbet made with thin starch noodles and rose water. I had a few bites but I didn’t finish it. 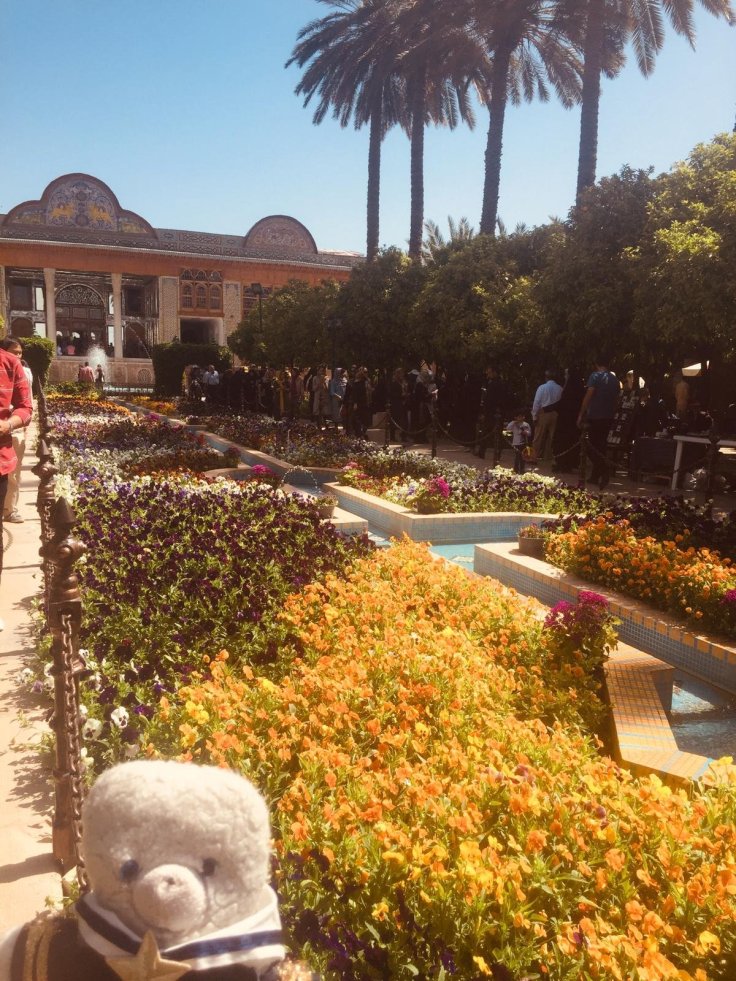 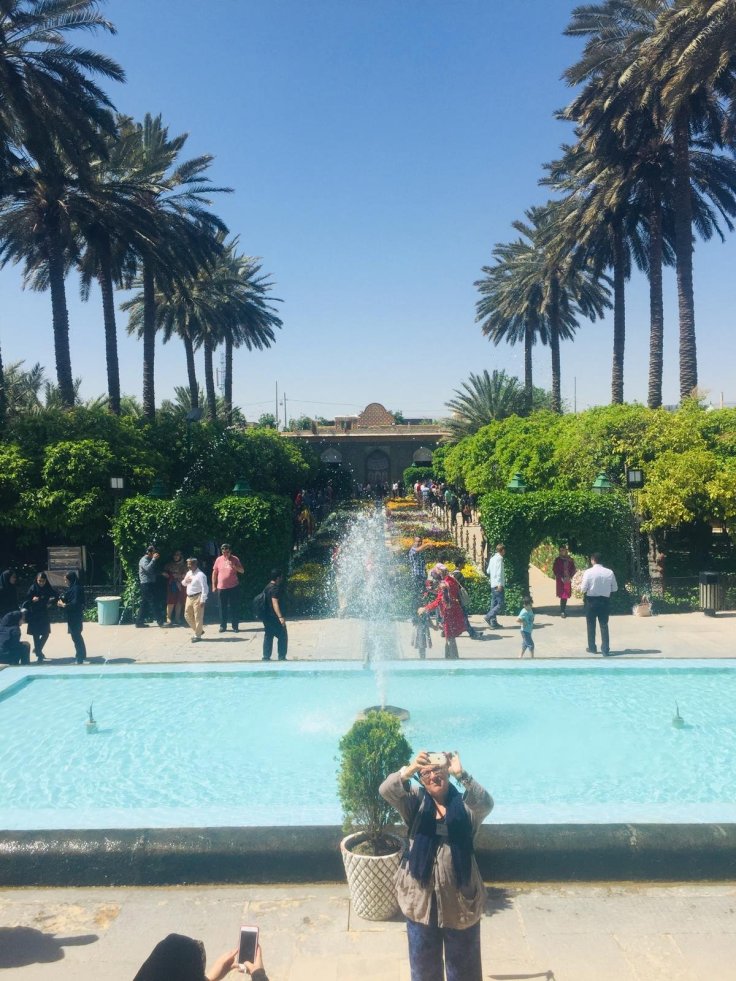 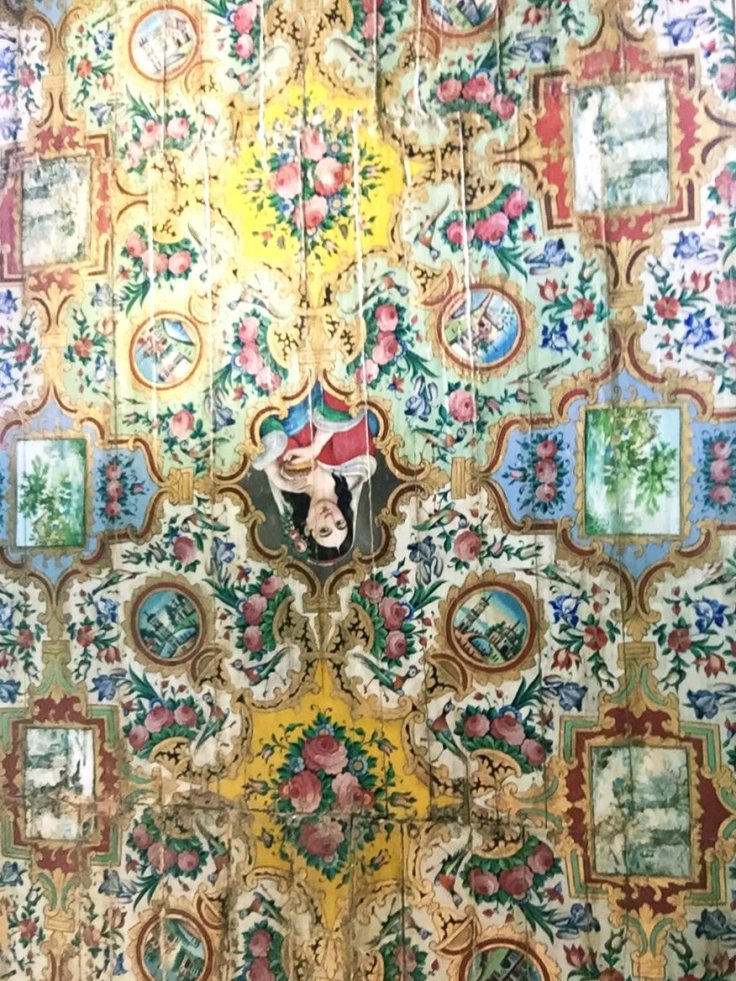 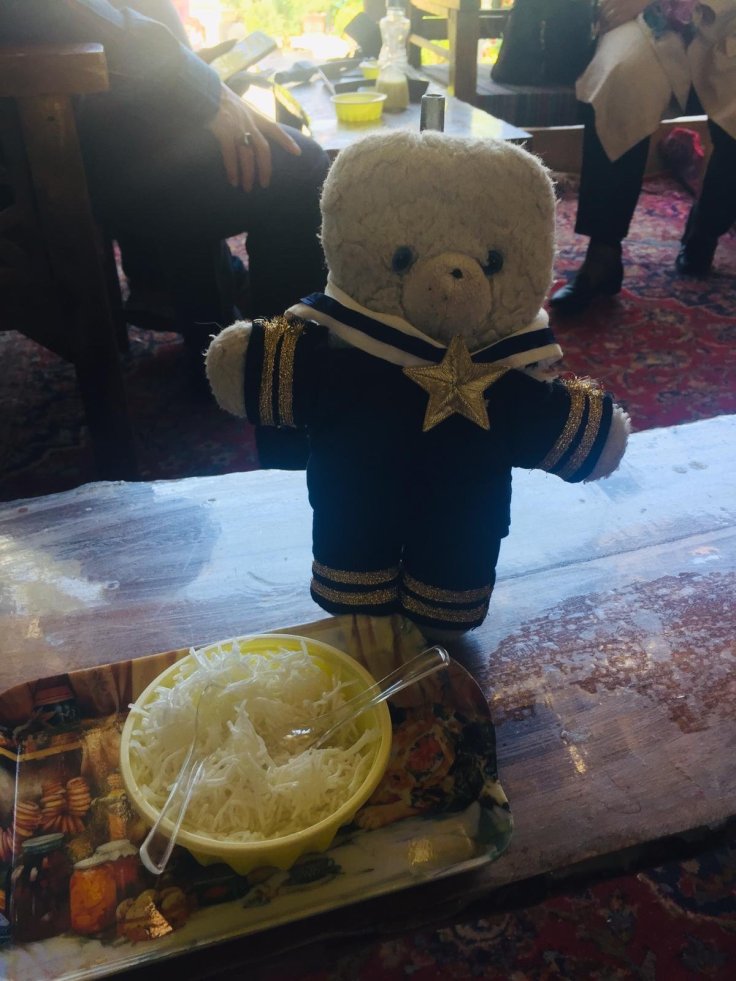 Following this I walked across the Khoshk River to the Imamzadeh-ye Ali Ebn-e Hamze, a 19th century shrine built for Emir Ali, nephew of Shah Cheragh. I had to wear a chador (an all covering cloak) and as I was about to return it a man working in the tourist office invited me for tea and biscuits and he answered some questions I had about the building. He explained that each fragment of mirror used in the mosaics reflect each and one of us and that by reflecting light it reflects God.

Next I took a taxi to the Aramgah-e Hafez, the Hafez mausoleum. Hafez is to the Iranians what Pushkin is to the Russians. Indeed Iranians have a saying that every home must have two things: first the Quran, then a collection of the works of Hafez. This 14th century pote is revered and almost every Iranian can quote his work, bending to whichever social or political persuasion they subscribe. The garden did not disappoint and I wondered about before having a late lunch. 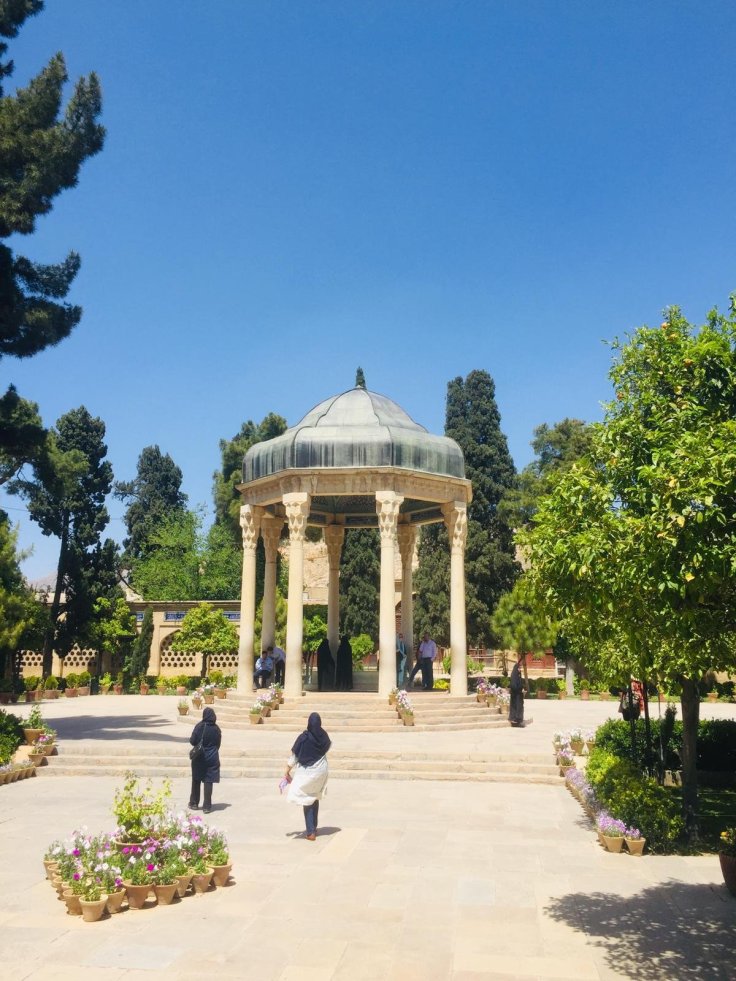 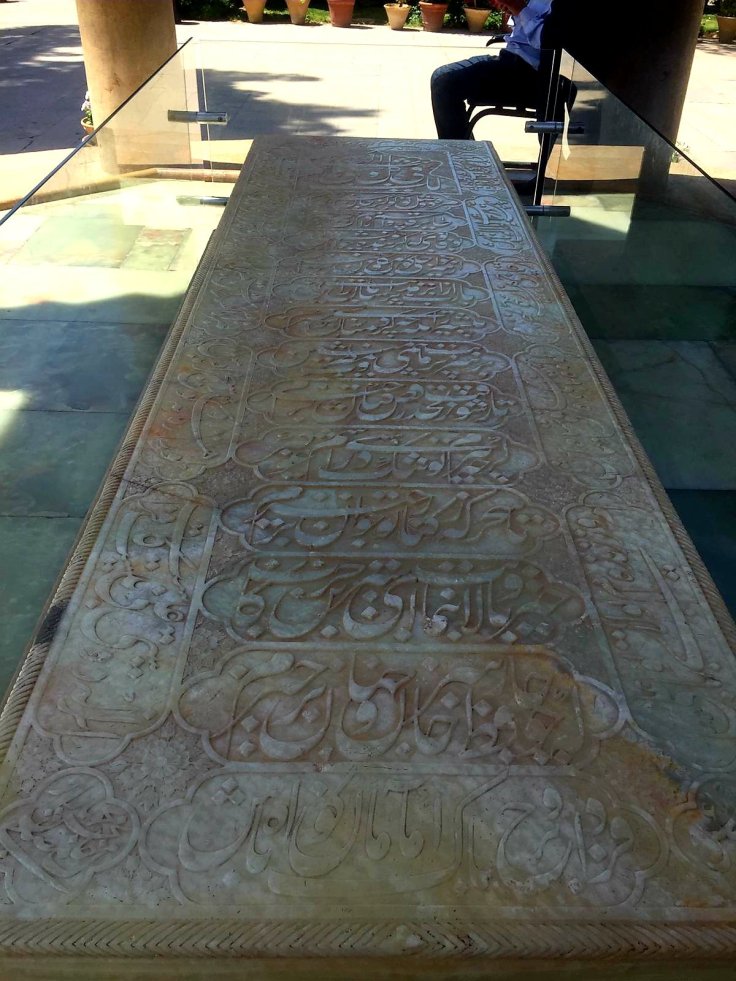 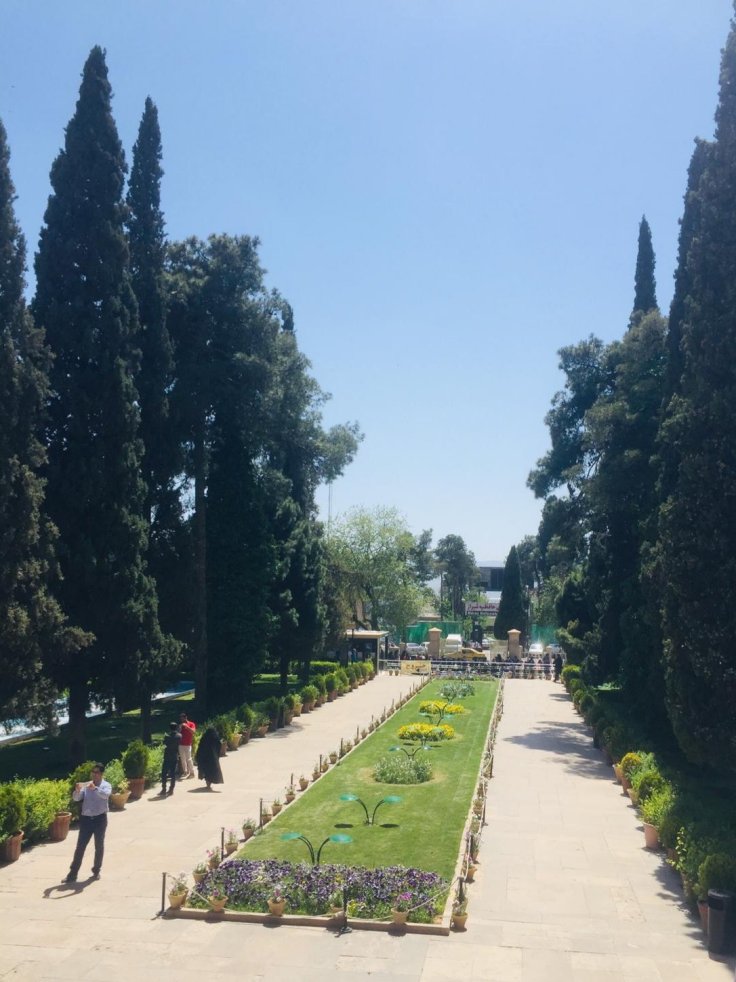 I finally went to the Citadel in the centre of the city, built in the early Zand period. One of the southeastern towers has a noticeable lean, having subsided in the underground cistern that served as a bathroom. What struck me when walking in the courtyard was the strong citrus smell as it is lined with rows of orange trees as you can see on the photo! 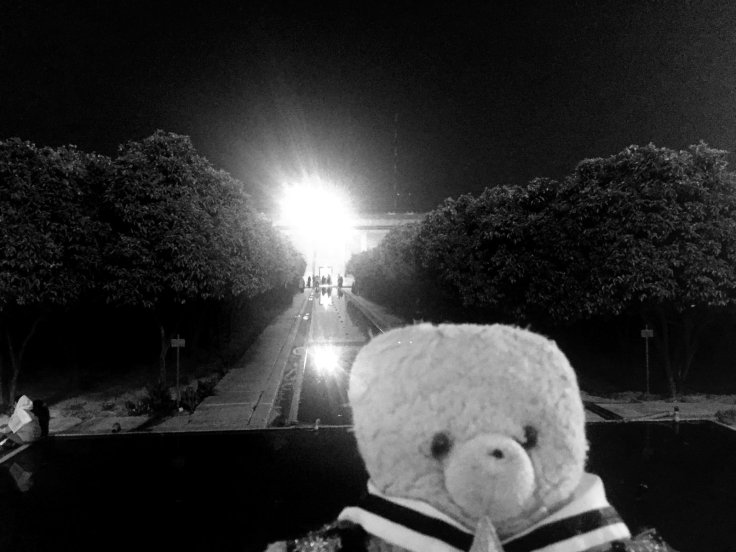 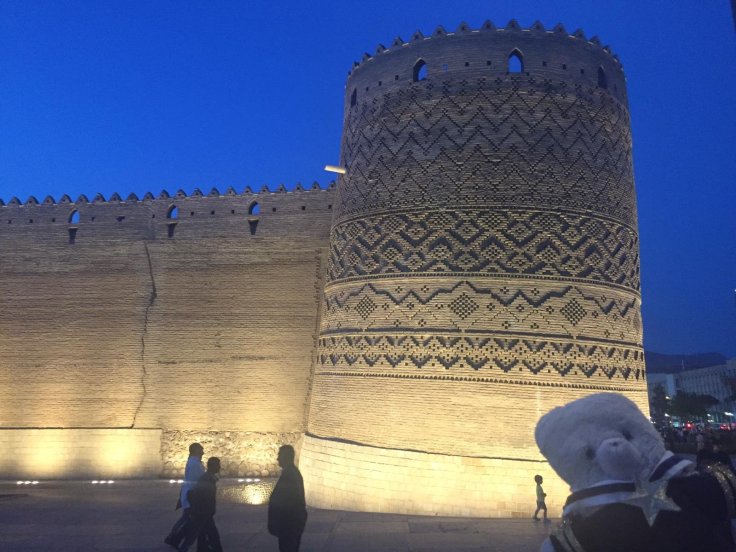 Back to the hostel now to write this blog before going out for dinner. I have a early start as I am visiting Persepolis tomorrow and the guide is picking me up at 7.30!

One thought on “Shiraz”