I woke up this morning to the sound of a very loud crowing cockerel.

This morning I had a novel shower experience as I cautiously stood over the ‘toilet’, trying not to fall or touch anything.

The bus to Yangjiajie had a disproportionate amount of security cameras. 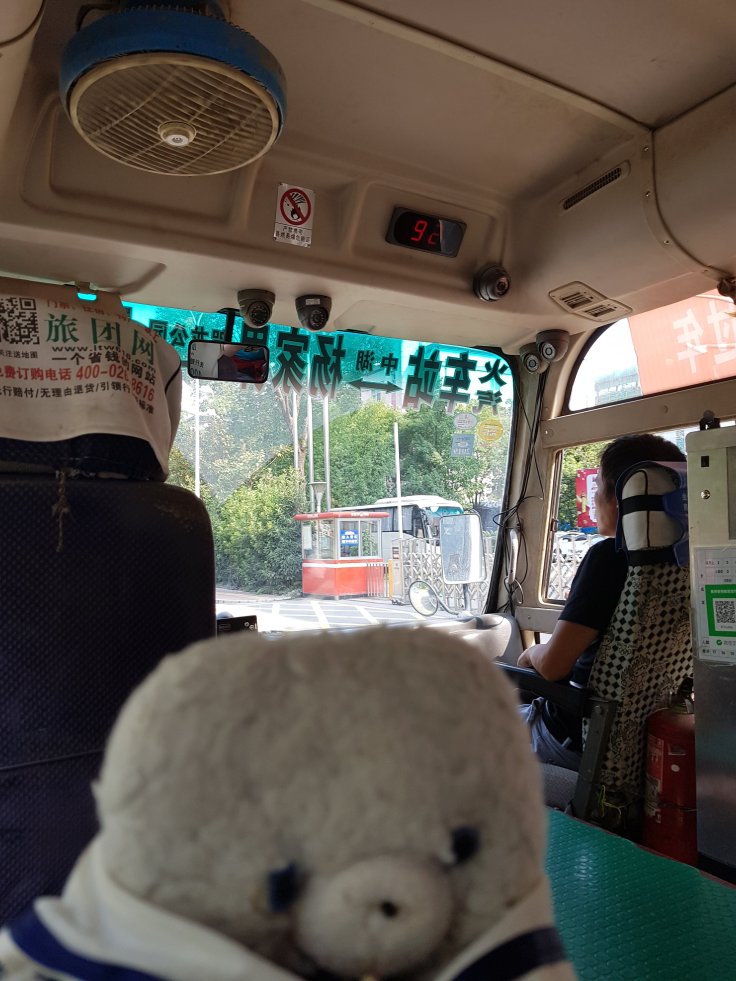 It took 2 hours on an increasingly bumpy road to get to the hotel, which was by the entrance of Yangjiajie park.

I left my bag at the hotel before being dropped off at the entrance.

A friendly dog kept me company as I waited for the bus.

Who was later joined by his friend. 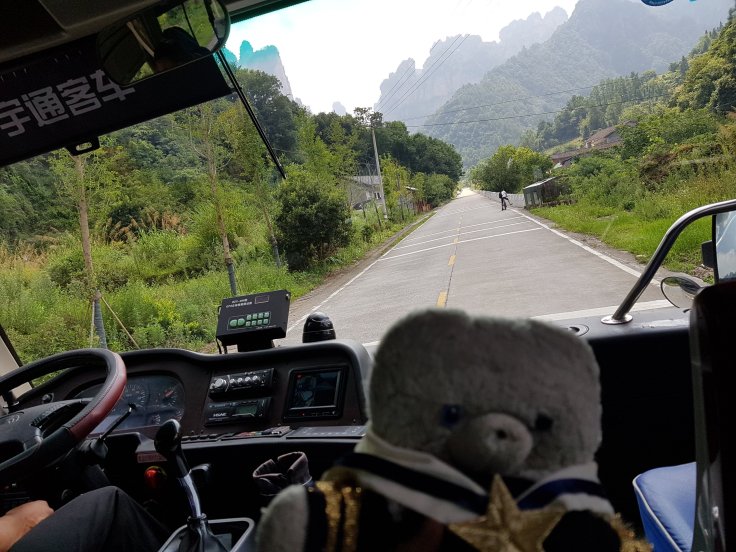 In Yangjiajie, I was greeted by a monkey. 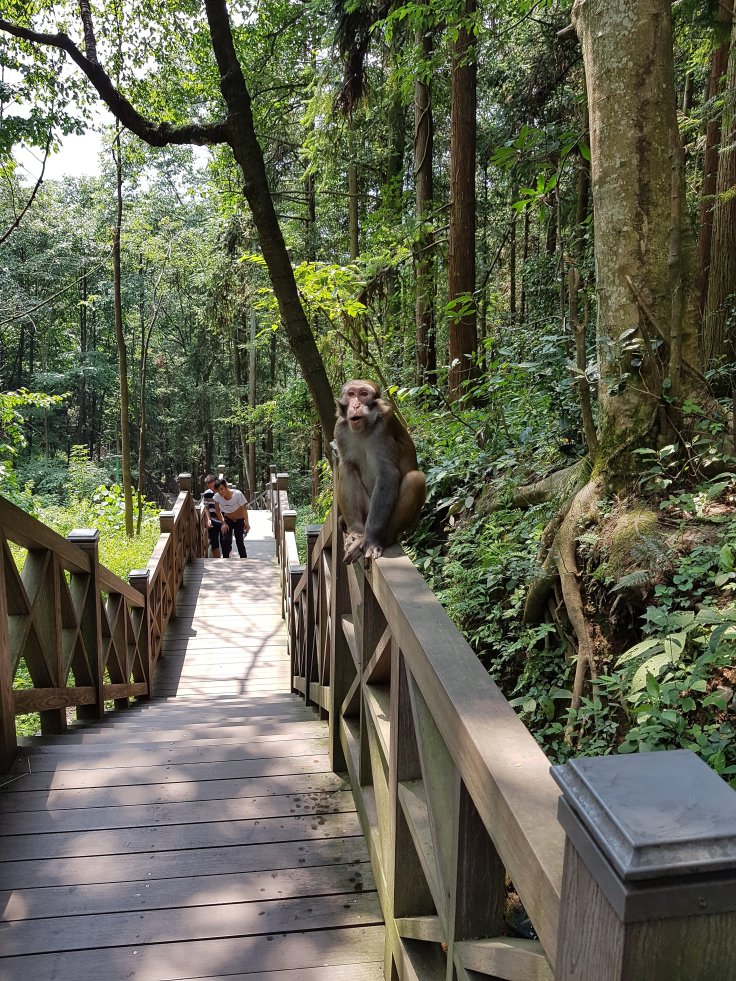 I took the cable car up to Huangshi village. 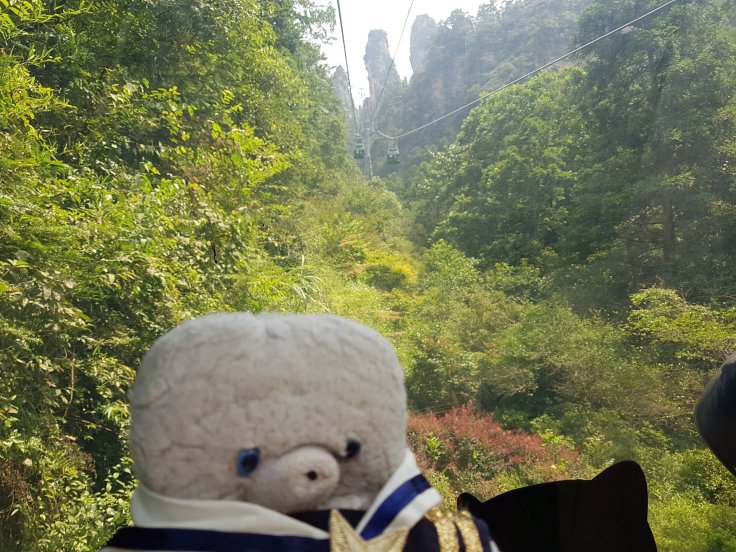 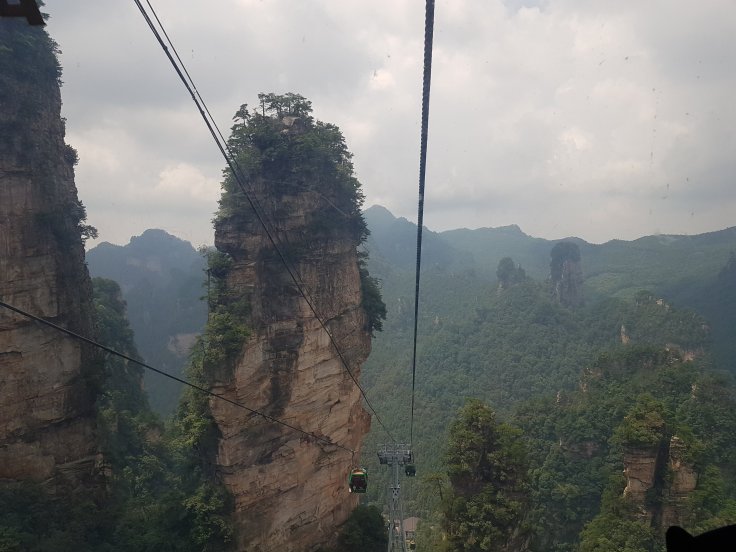 I was a little worried before visiting the park as I had no idea what I was going to do (other than I definitely wanted to be here). The hotel recommended a route and this cable car ride got me all excited again.

The views from Huangshi village are beautiful (fyi there is no village, it’s a mountain top). It was also far less busy than I expected to be.

I came across a family of monkeys. 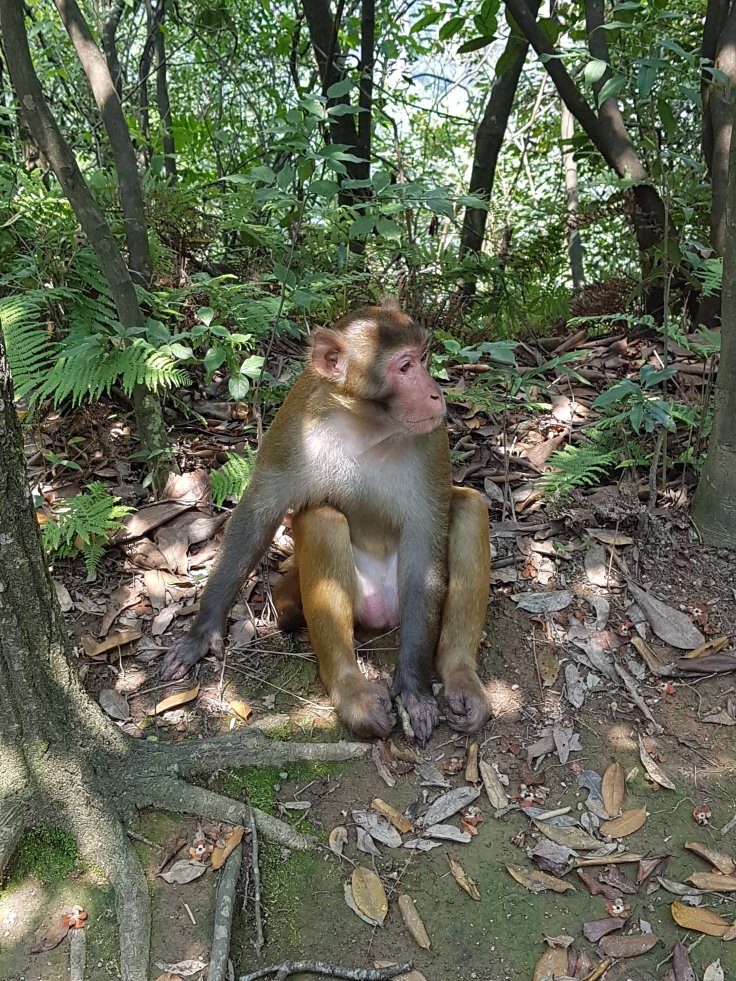 These 2 babies are getting used to stardom. 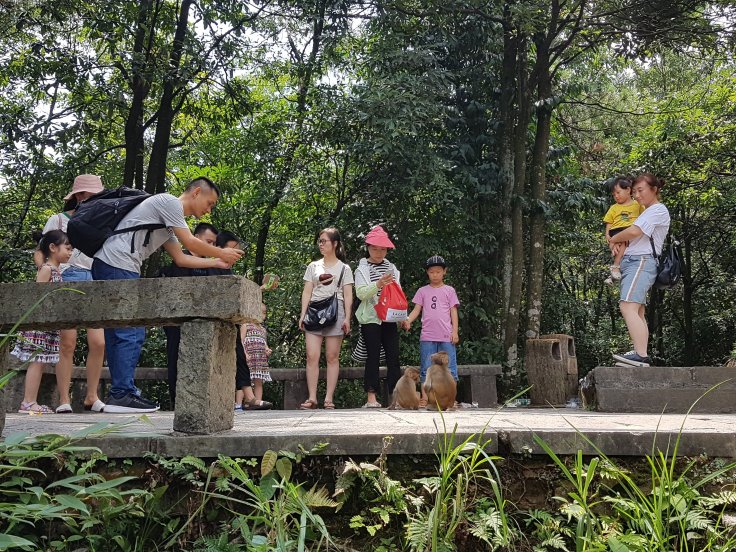 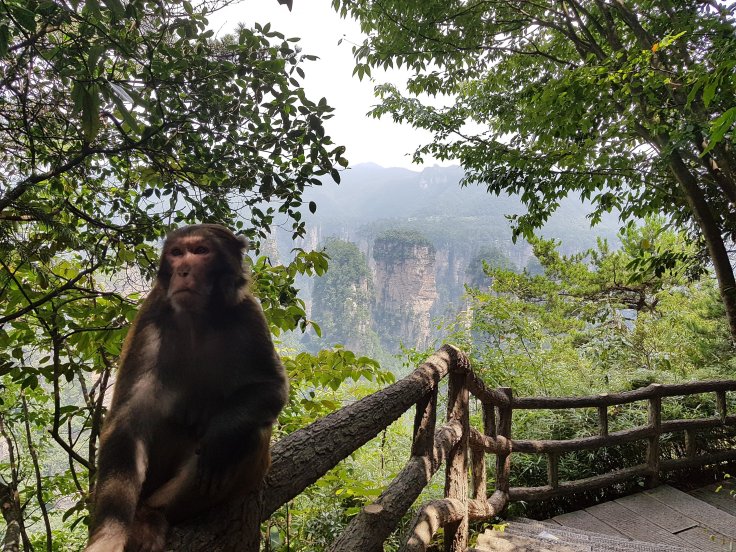 Within 30min of arriving, I was quickly accumulating baby monkey pictures. 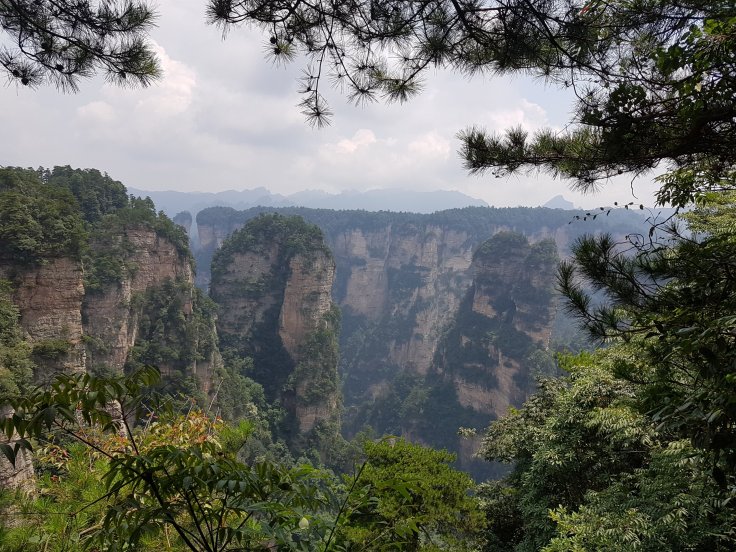 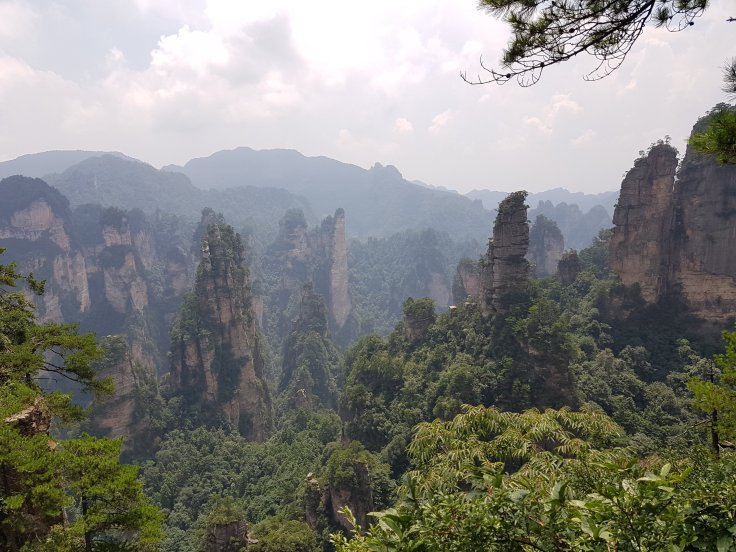 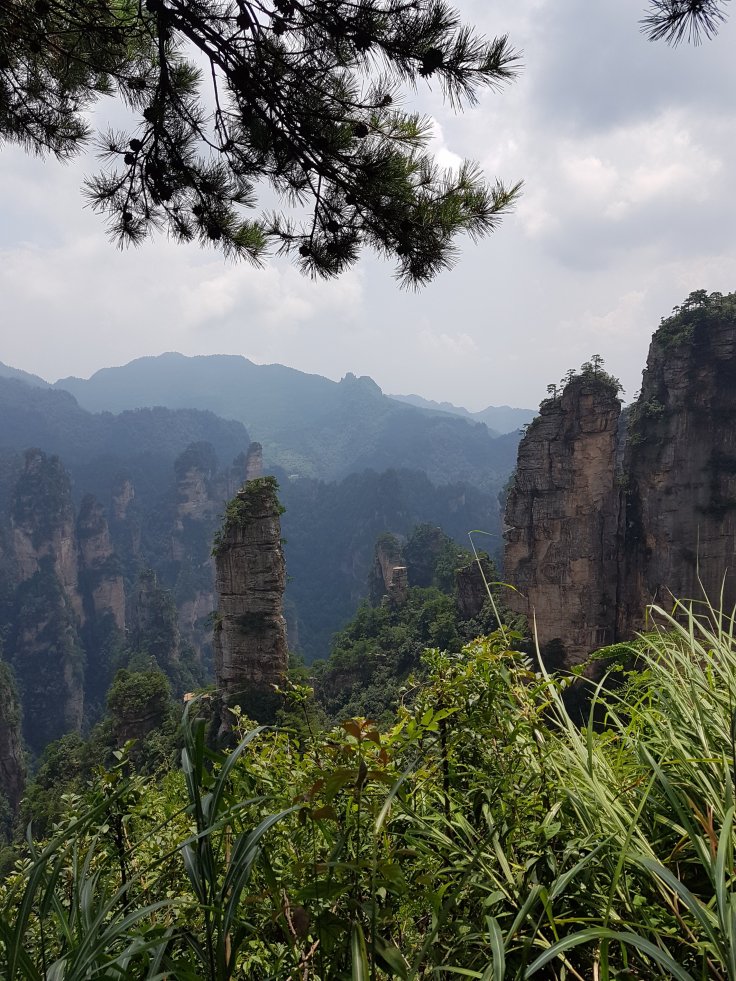 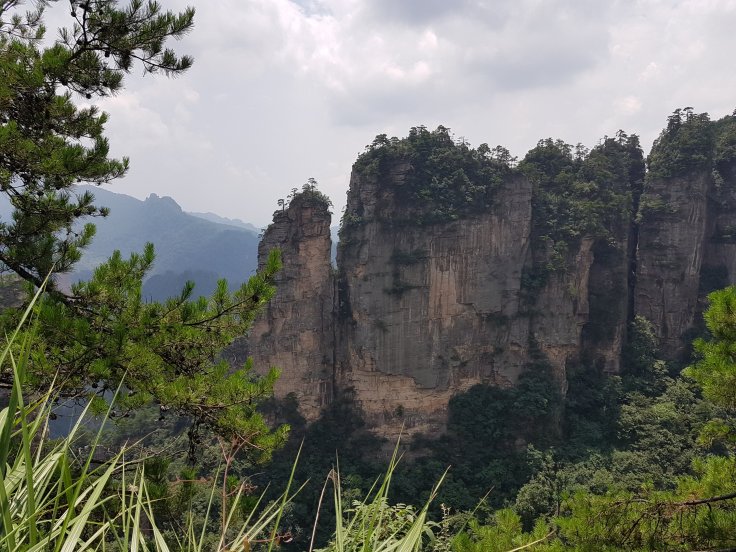 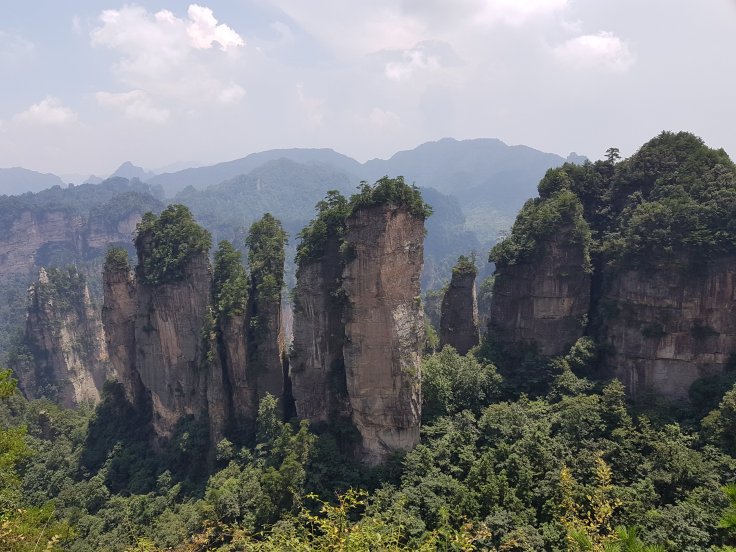 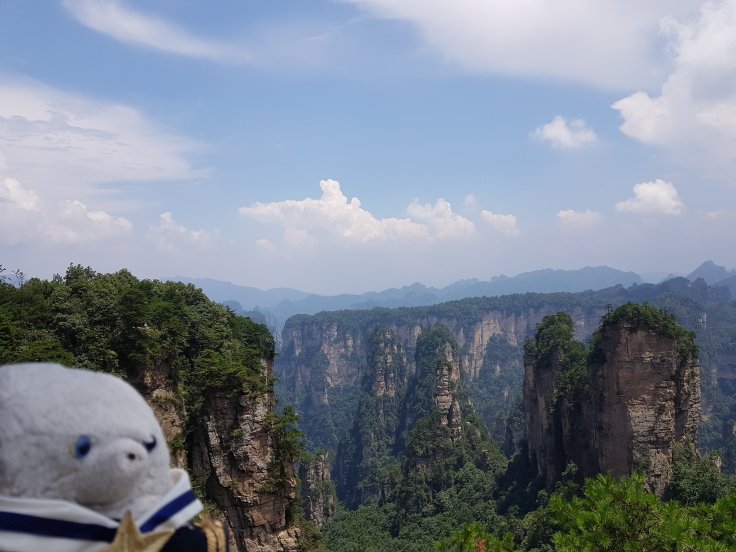 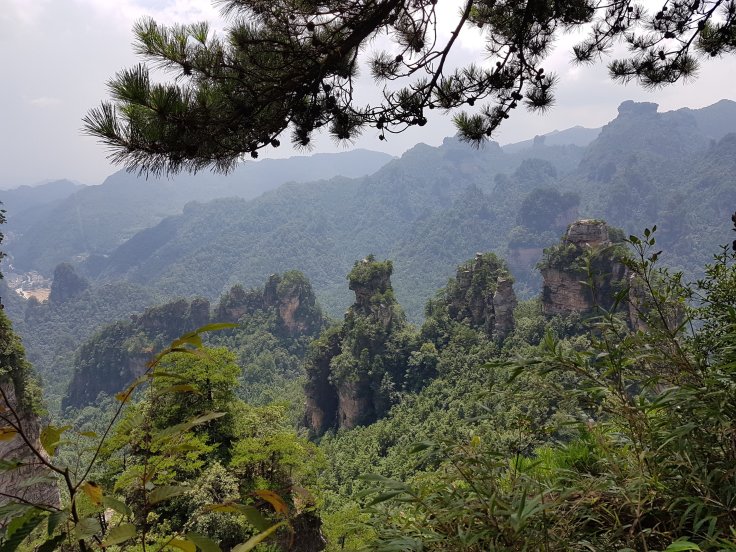 Ice cream break of the day ! (I think it was grape but it looked like beetroot) 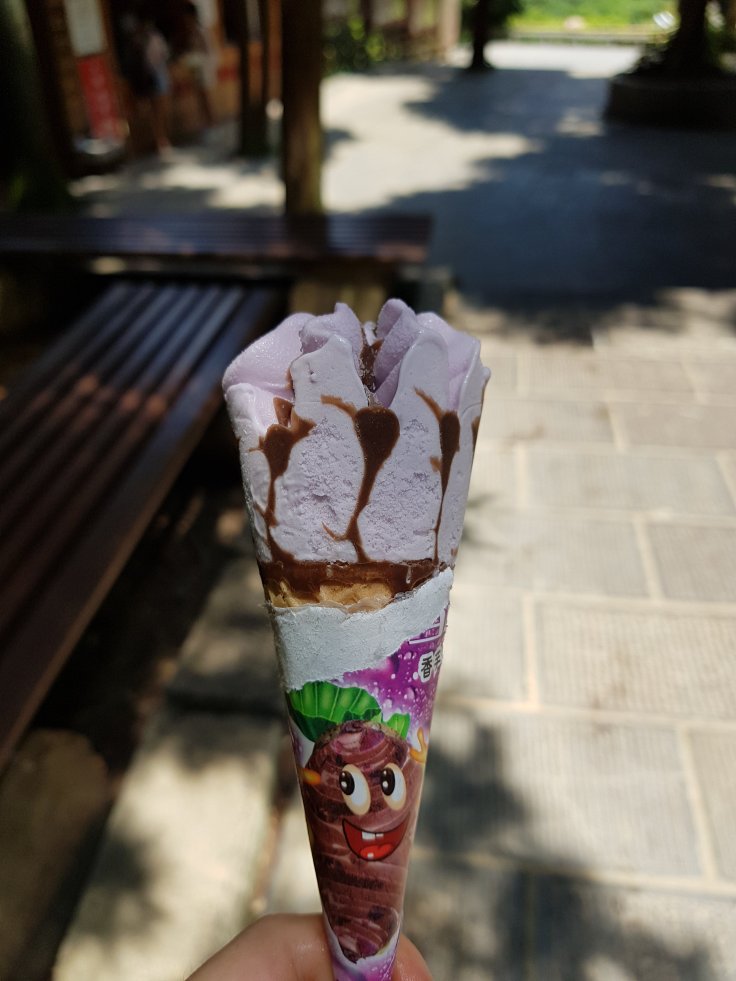 I walked down the mountain, where I quickly started eating the ice cream as it had caught the attention of the monkeys.

Such a disappointed face 😂 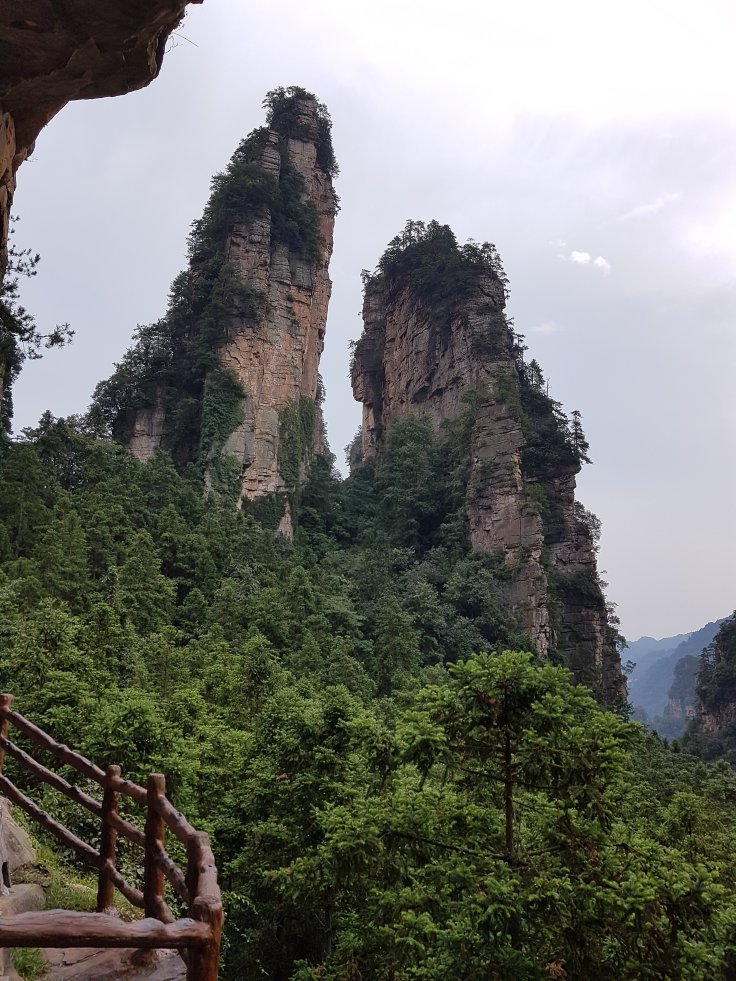 And went down the golden whip stream scenic route. 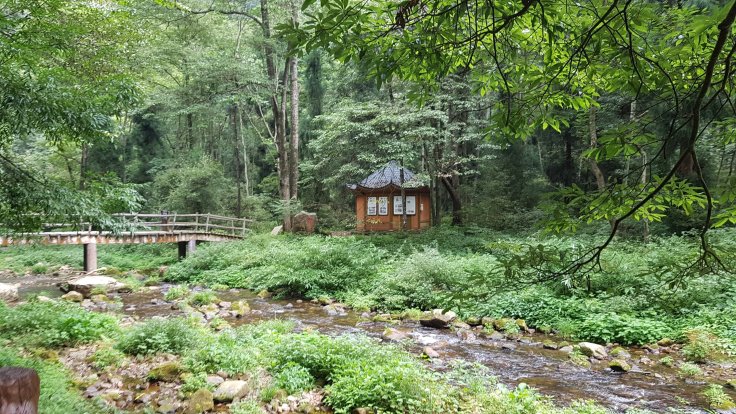 This route wasn’t that interesting but led to other parts of the park.

The medical centre had Soviet flags 🚩 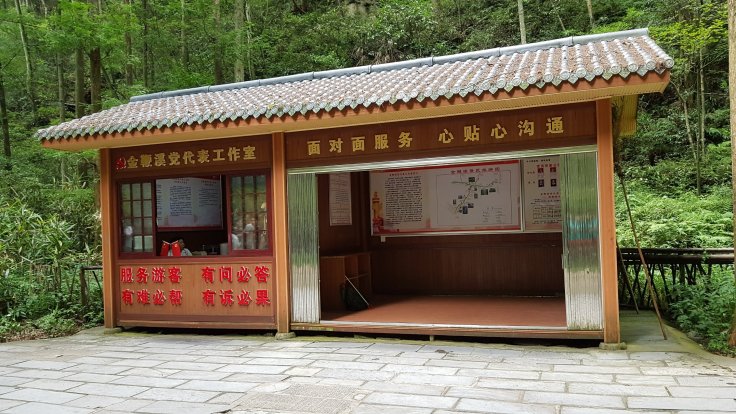 One of these is golden whip peak 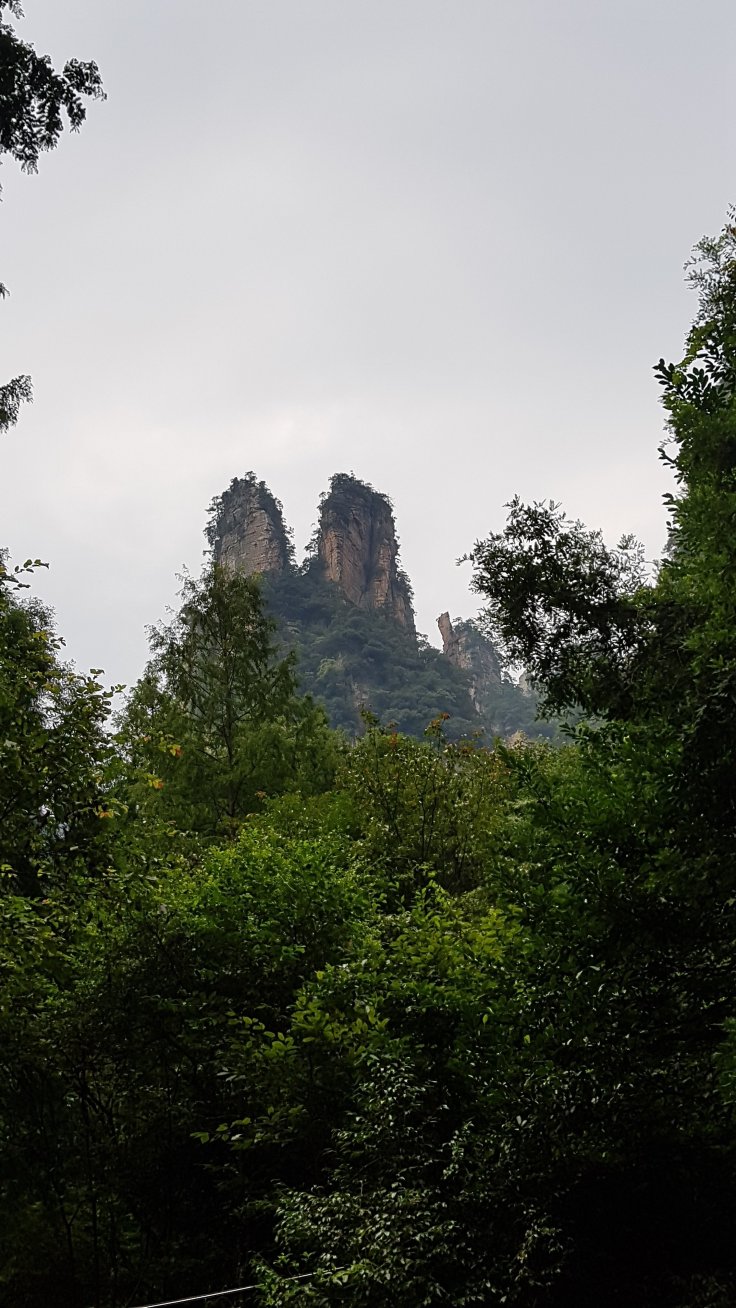 (It was split in 2 because of erosion and gravity)

I tried the water from the source of longevity.

It looked clean enough. It’s believed to prolong life and is meant to be full of essential minerals.

After a long and horrific climb up some seemingly never ending stairs, I made it to the back garden.

Just before that were some spectacular views. 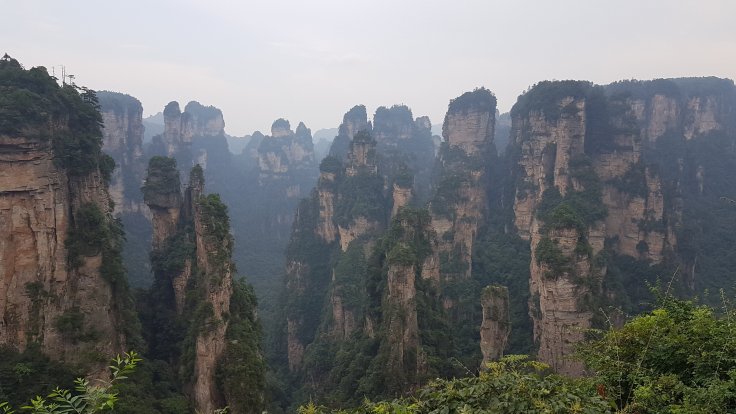 It was at the enchanting terrace/heaven pillar that I discovered where all the tourists were in this park. 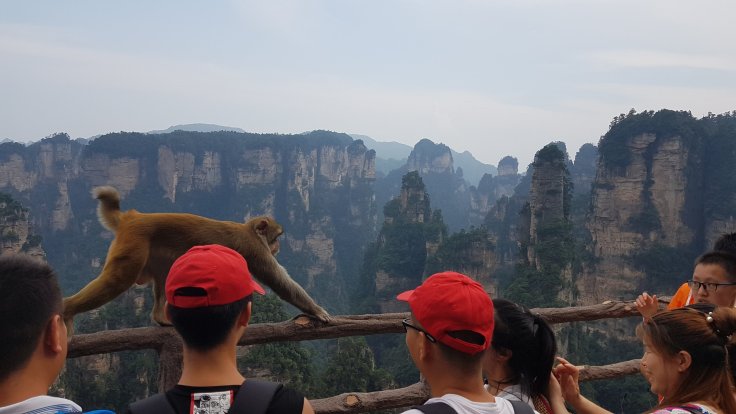 This monkey did a good job at stopping the flow of people, making it hard to move around.

I think it’s avatars hallelujah mountain (They all look a bit similar).

People were throwing money at this turtle. 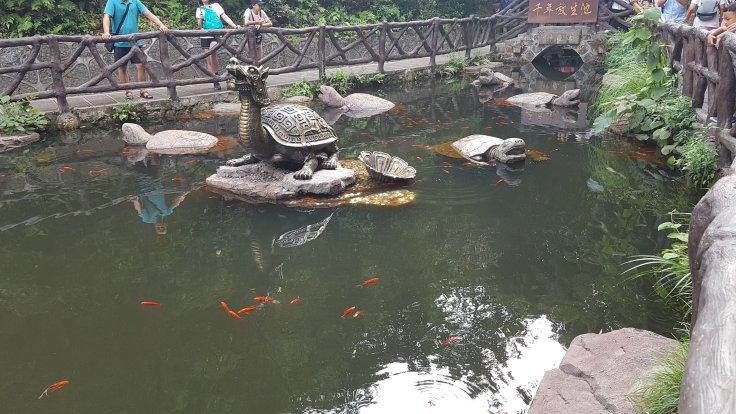 And somehow someone can make a business selling goldfish up there.

Just a reminder that behind the pictures is a teddy bear pushing it’s way through people, trying to mind his business and take pictures. 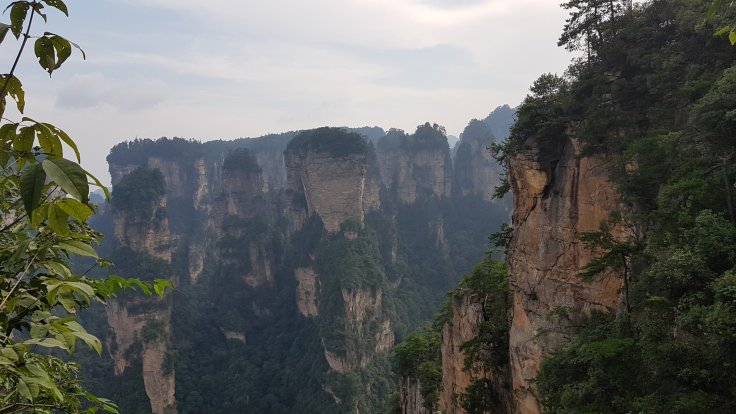 More fighting through the crowd over the world’s greatest natural bridge.

At this point, I was running out of time. The hotel owner said to be a bus station of Huangshi village cableway at 18:00 (imperatively) and that I should go up and down Gold whip stream route.

Instead I optimistically walked up to enchanting terrace (wish I’d known there was an elevator) and so planned to walk all the way down from Yangjiajie cable way after taking the bus there.

Despite running out of time, I did a detour to Wulong village.

Wulong village is not a village. It’s a bunch of fast food restaurants and touristy stuff. 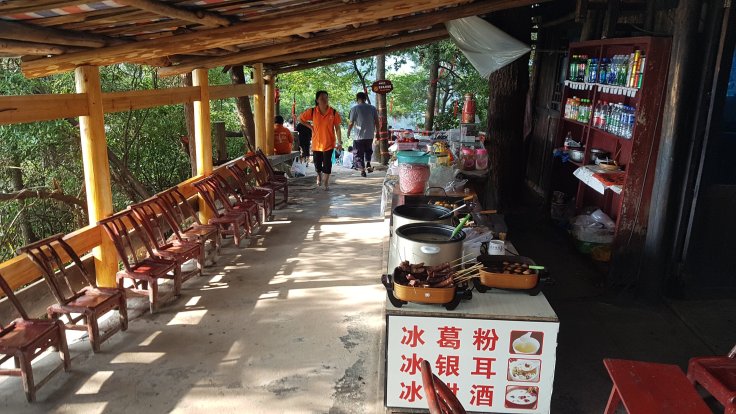 In Wulong village is tianbo mansion.

Tianbo mansion is not a mansion, it’s a viewing platform.

To get there, you need to climb some unconvincing metal ladders. But the views are worth it. 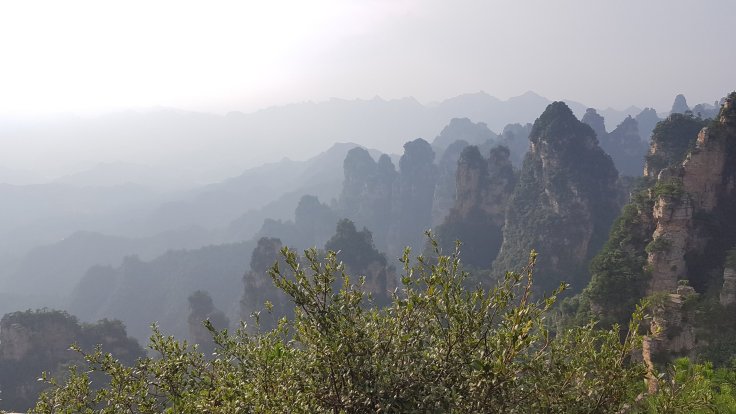 On the way down from Wulong village, I passed by this confusing sign on the path. 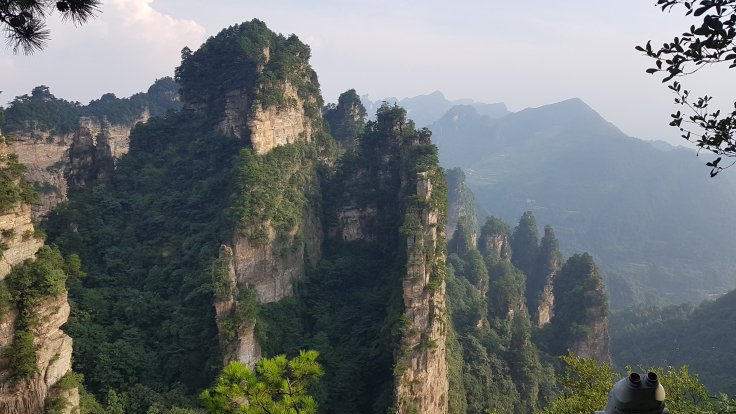 The man praying to Buddha:

(I don’t quite see it either)

The sun started to set, causing me to hurry my way downwards. 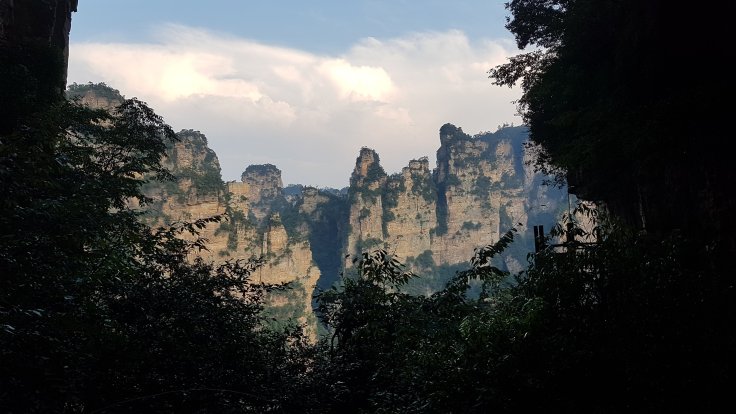 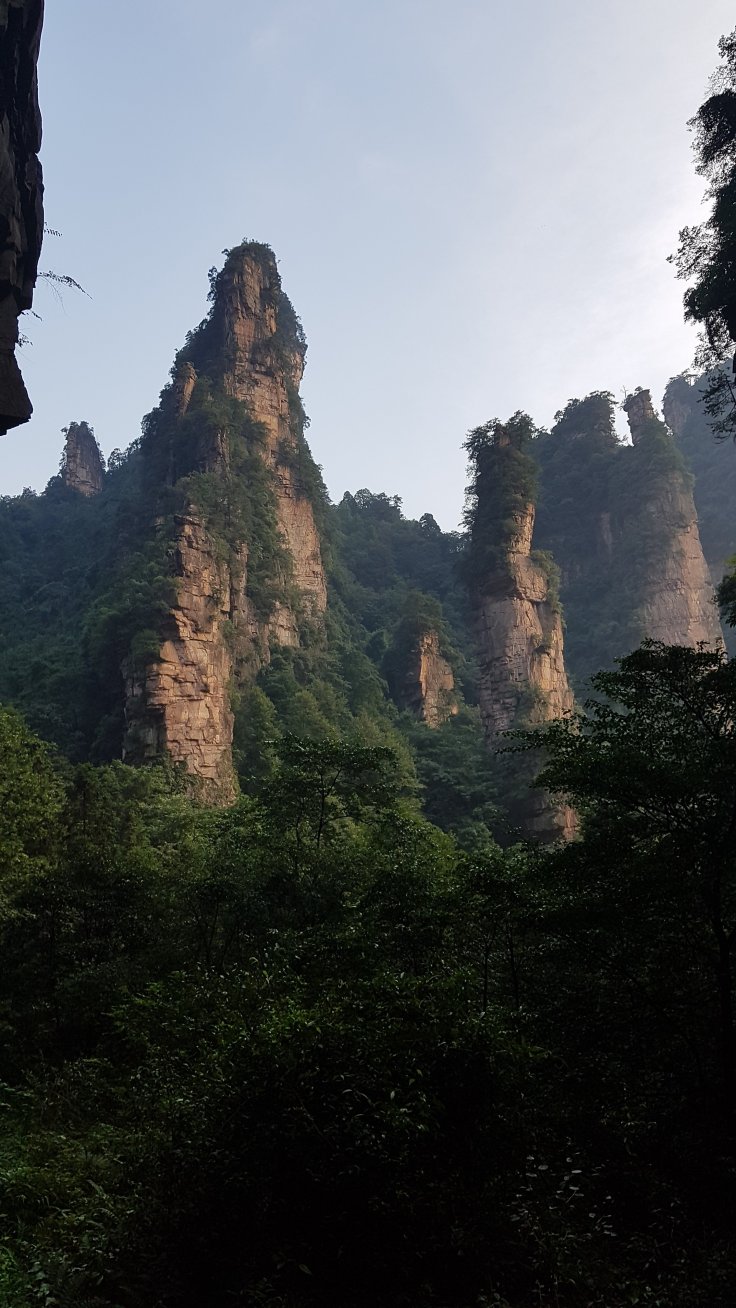 I finally arrived at the bottom of Yangjiajie cableway a bit in a sweaty mess. As I walked towards the bus stop, I heard a wonderful voice calling out ‘iced coffee!’ 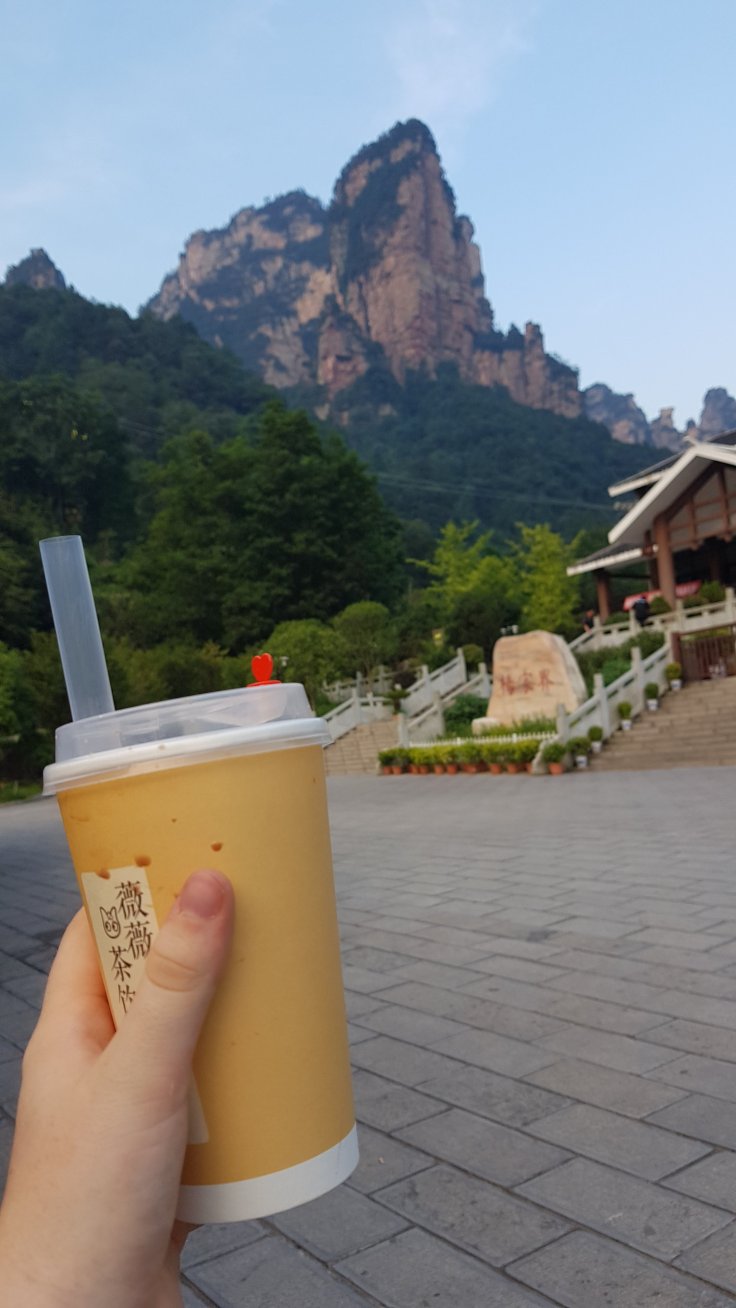 At the hotel I treated myself to a delicious and filling meal of zucchini, potatoes, chicken and rice.

(Whilst in turn being eaten by mosquitoes)
晚安! (Wan an) Bonne nuit ! Good night!

One thought on “Yangjiajie”